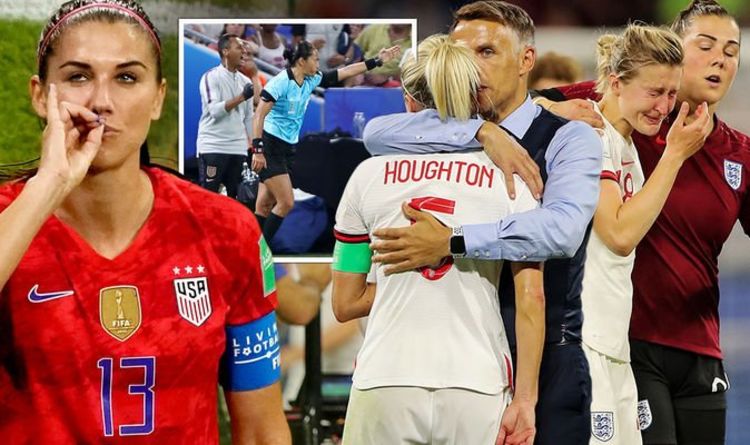 Match officials in Lyon took several minutes to come to the decision to award the spot-kick after a tangle inside the box between Ellen White and Becky Sauerbrunn was reviewed on the VAR system.

England striker White had raced onto the ball as it rolled across the box, but failed to make any contact under challenge from the USA centre-back.

She later turned to VAR to award England a penalty after checking the pitchside monitor for several minutes during a long delay.

American defender Sauerbrunn was booked as a result of her coming-together with England hotshot White.

England skipper Houghton stepped up from the spot, but her weak penalty was saved by Alyssa Naeher to the despair of Phil Neville and his players.

Four years ago it was an injury time own goal that cost England against Japan in the semi-final, this time around it was a late penalty.

White had equalised in the first half and she thought she’d done the same after the interval, before VAR ruled her second goal offside.

England were awarded four penalties at the Women’s World Cup, more than any other team.

Unfortunately, they missed three of them, also more than any other of the sides.

The one positive from the 2-1 defeat to the USA, was White is level with Alex Morgan at the summit of the top scorers chart with six goals.

Morgan also has six goals to her name, having netted the all important winning goal against England.

Christen Press had given the favourites the lead inside ten minutes with a superb header before White drew England level.

Morgan then struck with a header of her own just after the half-hour mark which left Lionesses goalkeeper Carly Telford grasping at thin air.

England ended the game with 10 women as centre-back Millie Bright was shown a second yellow card and a subsequent red card for a high tackle.

Holland take on Sweden in the other semi-final on Thursday and Neville’s Lionesses will face the loser on Saturday in a chance to go out on a high in the third and fourth placed play-off.

The USA await the victors in Sunday’s final, which will be held at the Parc Olympique Lyonnais, the site of English football’s latest penalty heartbreak.

April 2, 2020 Admin Comments Off on Premier League could see NO VAR and five substitutes on return amid coronavirus pandemic