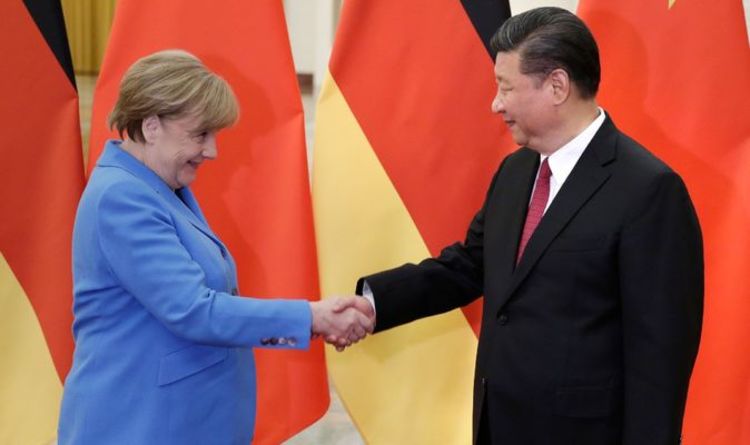 The report by the Foundation for the Defense of Democracies claims Germany is key to China’s ambitious plans. Emily de la Bruyere, senior fellow at the foundation and an author of the report, said Beijing sees Europe as the “battlefield for what they diagnose to be a third world war”.

She told Fox News: “China sees Germany as the linchpin in that battle.

“If China can win Germany, it can win Europe. It can win the world.”

The report describes how China wants to win the “new industrial revolution” with its Made in China 2025 plan, which was announced in 2015.

“MIC2025 targets Germany first as a source of technology, second as a partner through which to export standards favourable to China, and third as a competitor for the lead in the current industrial revolution.

“China focuses on fields in which Germany excels, including the automotive, machinery manufacturing, chemical, medicine, and electronics sectors as well as new energy and environmental technologies.

“China also targets areas where Germany has influence over global standards, such as banking, new energy vehicles, and energy.

DON’T MISS
China plans to rule the world and we are playing into their hands [COMMENT]
China news: Xi Jinping caught repeatedly coughing during speech [VIDEO]
China warning: Beijing orders US out of Taiwan Strait [INSIGHT]

“China also prioritises emerging fields in which global leadership has yet to be established, such as 5G and financial technology.”

The report comes after the MI5 warned China will pose “big challenges” for the UK over the next decade.

The new director general of the security service, Ken McCallum, said: “On state-based hostile activity, I think we are looking at two lines that are going to cross.

“If the question is – which countries’ intelligence services cause the most aggravating to the UK in October 2020 the answer is Russia.

“If on the other hand the question is which state will be shaping our world across the next decade, presenting big opportunities and big challenges for the UK the answer is China.

“You might think in terms of the Russian intelligence services providing burst of bad weather, while China is changing the climate.”

EXCLUSIVE: Furious MEPs tear apart Juncker speech – shows he is 'away with the fairies'

September 15, 2018 Admin Comments Off on EXCLUSIVE: Furious MEPs tear apart Juncker speech – shows he is 'away with the fairies'