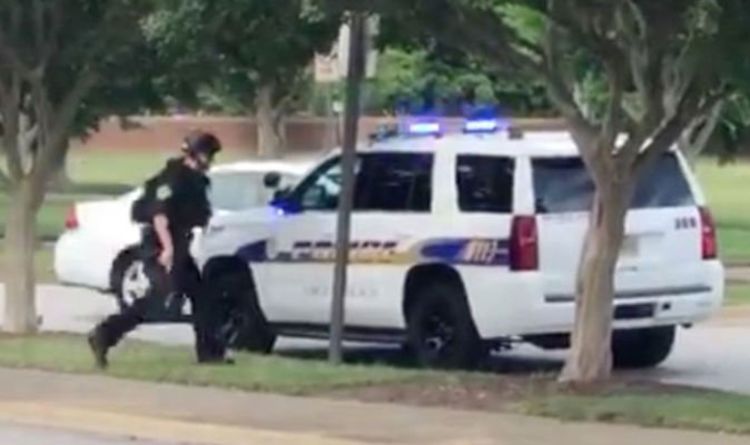 Police chief James Cervera confirmed the number of fatalities and that the shooter, who was a public utilities worker, was also killed. A further six people were hospitalised. The courthouse was put on lockdown with emergency services and armed police on the scene.

One woman wrote on Twitter: “There’s an active shooter situation occurring right now and all of the cops in Virginia Beach are flying down Nimmo Parkway there’s an officer that has been shot currently at the Post Office on George Mason.

“There is a shooter still shooting through a door on the third floor of what I’m assuming is the apartments behind Harris Teeter by the courthouse.

“Multiple shooting victims in the area.”

She added: “SWAT just arrived trying to secure the area.

“Apparently this shooter got multiple victims and is still shooting.”

The woman described seeing police cars reaching high speeds to get to the location.

She claims that the emergency services are continuing to sweep the area in a bid to clear it of any possible dangers.

But in more graphic detail, the Twitter user said that one man sustained a gunshot wound to the face.

She added: “Multiple hiding in stairwells.

“Officers are still rushing to scene.”

Meanwhile, Virginia Beach Police tweeted: “ACTIVE SHOOTER SITUATION-municipal center, building 2. Multiple injuries. At this time it is believed that only 1 shooter, and they have been taken into custody. More to follow.”

People have also been seen coming out the building crying and holding each other.

Joe Biden RAGE: Brussels to INFURIATE US President as EU goes around USA for China deal

December 30, 2020 Admin Comments Off on Joe Biden RAGE: Brussels to INFURIATE US President as EU goes around USA for China deal