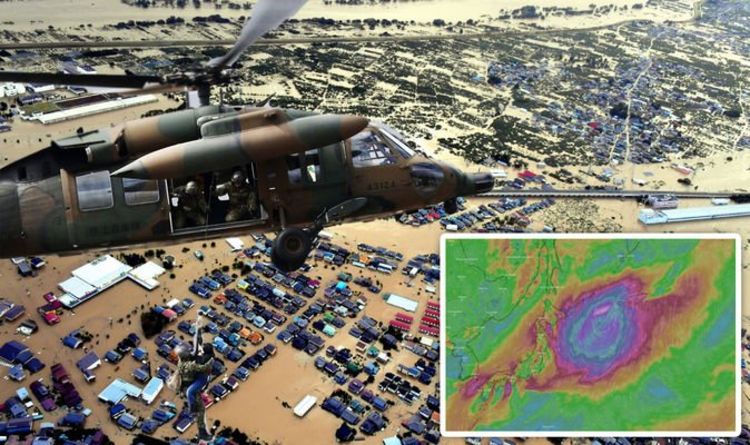 Typhoon Hagibis is inching toward Japan and its busy capital Tokyo. The gigantic storm is expected to make landfall on Saturday as the country braces for life-threatening conditions. The large and violent monster storm is moving north-northwest at 15mph, packings winds of 157mph as of 9am on Friday morning.

READ BELOW FOR LIVE UPDATES ON TYPHOON HAGIBIS

The services will resume Sunday afternoon, but delays could be possible depending on the storm’s damage.

Tokyo’s Disneyland will also be closed on Saturday.

Formula 1 has cancelled all events on Saturday as the typhoon nears.

The qualifying and race on Sunday are still scheduled to take place.

Valtteri Bottas led Lewis Hamilton to a Mercedes one-two in second practice and those results could decide the grid if conditions are too difficult to hold qualifying on Sunday morning.

Typhoon Hagibis is expected to bring record-breaking rain and winds to the Tokai and Kanto regions, including Tokyo according to the Japan Meteorological Agency.

8.19pm update: Expert speaks out about how climate change is an issue for sport

The storm has wind speeds of 104mph near the centre and 150mph wind gusts.

5.34pm update: Residents across Japan are preparing for the storm to hit

Residents are preparing for the storm to hit, using tape and sandbags to protect their homes.

Many people hae also boarded up their windows in order to protect them.

Now Japanese authorities have also announced that travellrs should check the following web pages before travelling:

Hagibis will likely make landfall in central or eastern Honshu over the weekend.

Railways and supermarkets have announced plans to suspend or minimize operations for much of Saturday.

The Japan Meteorological Agency said Typhoon Hagibis was projected to hit either the Tokai region or the Kanto region on Saturday evening or later.

It will then grind its way north through Tohoku.

This because Hagibis is likely to bring strong winds and high waves, as well as record heavy rainfall over wide areas.

Mr Kajihara called on people to evacuate as quickly as possible to protect their lives.

He said violent winds and rough seas are expected in wide areas, mainly in eastern Japan, from Saturday through Sunday.

1.15pm update: Record rainfall could lead to more deaths than Typhoon Kanogawa in 1958

He also added Hagibis could bring rainfall on the same level as the “Kanogawa Typhoon” of 1958.

Kanogawa left more than 1,200 people dead or missing in Shizuoka and the Kanto region.

Mr Kajihara also warned the entire nation to be on the alert for violent winds, high waves, flooding in low-lying areas, swollen rivers and storm surges.

World War 3 warning: ‘US ready to fight to the last Brit’ as NATO and Russia tensions rise

December 17, 2018 Admin Comments Off on World War 3 warning: ‘US ready to fight to the last Brit’ as NATO and Russia tensions rise