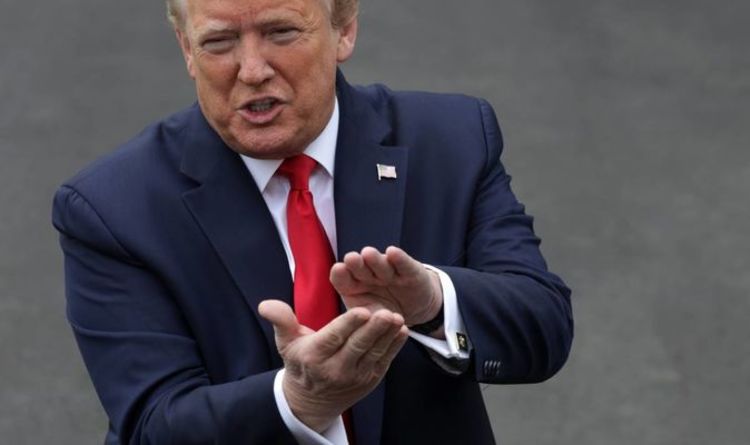 The comments came a day ahead of the president’s visit to a Ford motor plant in Michigan yesterday, which has started making medical supplies. Trump was asked at a briefing whether he was concerned about his threats to Michigan to withhold funding to the state, despite the fact that there are reports of a flooding emergency there.

“I was honoured as Man of the Year in Michigan at a big event.”

Trump said that this particular event occurred around five or six years before he considered running for president.

Trump this week threatened to suspend funding to the state because of its decision to send absentee ballot applications to 7.7 million of its voters ahead of the 2020 presidential election.

Trump claimed in a Tweet: “This was done illegally and without authorisation by a rogue Secretary of State.

“I will ask to hold up funding to Michigan if they want to go down this Voter Fraud path!”

An absentee ballot allows citizens to vote by mail, instead of physically attending a polling station.

Trump’s original tweet read that the state had sent absentee ballots – rather than ballot applications – but this has since been deleted and rewritten because the claim was false.

And Trump’s claim that Michigan’s delivery of the absentee ballot applications was illegal have been widely refuted.

It remains to be seen whether the President will go through with his threat to withhold the state’s funding – though the New York Times states this is “unlikely”.

Meanwhile, CNN reporter Daniel Dale called Trump’s ‘man of the year’ claim “one of my favourite Trump lies, out of all the thousands of Trump lies.”

Dale said that Trump has been making the claim for over three years.

CNN reports that the State of Michigan does not have an official Man of the Year award, which is one key reason that Trump’s claim has been refuted.

Former Republican congressman from Michigan, Dave Trott, reportedly contacted CNN to say that there was a Lincoln Day dinner in Michigan in 2013 that Trump spoke at, which may be the event that Trump was referring to.

He said that Trump was given some gifts following his speech, but none of them were a Man of the Year award.

However, Trump was named Person of the Year by Time magazine in 2016.

October 16, 2018 Admin Comments Off on Royal fears as Tonga hit by EARTHQUAKE just days before Meghan and Harry visit