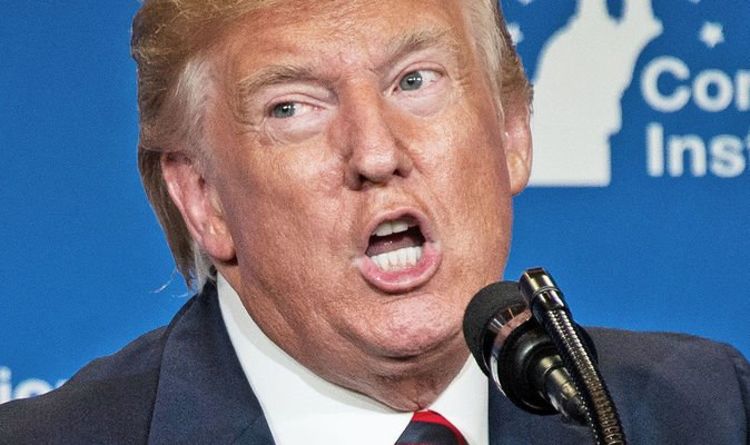 The shock has disrupted five percent of the world’s oil output, causing concern that price of oil may spike as the Kingdom is crucial to the world’s flow of the precious hydro carbon. Trump claimed on Sunday he was “locked and loaded,” but is waiting for verification and for a Saudi assessment of responsibility before deciding how to proceed. He tweeted: “Saudi Arabia oil supply was attacked.

“There is reason to believe that we know the culprit, are locked and loaded depending on verification, but are waiting to hear from the Kingdom as to who they believe was the cause of this attack, and under what terms we would proceed!”

He then assured the US that they still had “PLENTY OF OIL!” in reserve to avert a rush on the commodity.

Yemen’s Houthi rebels took responsibility for the attacks but they are often backed by Iran.

The US President confirmed he had authorised release of reserve oil to stabilise prices.

Secretary of State Mike Pompeo also tweeted that the blame may lie with Tehran.

Mr Pompeo tweeted: “Tehran is behind nearly 100 attacks on Saudi Arabia while Rouhani and Zarif pretend to engage in diplomacy.

“Amid all the calls for de-escalation, Iran has now launched an unprecedented attack on the world’s energy supply.

“There is no evidence the attacks came from Yemen.”

CNN National Security Analyst Peter Bergen said there have been more than 200 drone and missile attacks launched by Houthi rebels from Yemen into Saudi Arabia, and none have been as effective as Saturday’s attack, lending credence to the belief that the attack did not originate from Yemen.

The attack in the Saudi Arabia, the world’s top oil exporter, immediately wiped out half its production of ten million barrels a day, which experts said would take weeks to restore.

Up to ten hi-tech drones fired missiles on the world’s biggest refinery, Abqaiq, and a vast oil field, Khurais, early on Saturday.

The incident ratcheted up the war of words between Washington and Tehran at a time when Donald Trump was seemingly softening his stance towards Iran.

Houthi rebels in Yemen, where a civil war has raged since they partially unseated the Saudi-backed government, claimed responsibility for the damage at the Aramco oil facilities.

But US Secretary of State Mike Pompeo said there was “no evidence” for the claim.

He implicated Iran, which he claims is waging a proxy war in Yemen by funding the Houthi rebels in their conflict with the old regime backed by an international coalition led by the Saudis.

He added: “The Americans adopted the maximum pressure policy against Iran which, due to its failure, is leaning towards maximum lies.”

Amirali Hajizadeh, the head of the Revolutionary Guards Corps Aerospace Force, warned the Islamic Republic was ready for a “fully-fledged” war.

He added: “Everybody should know that all American bases and their aircraft carriers are in a distance of up to 2,000km (1,250 miles) around Iran and are within range of our missiles.”

March 7, 2019 Admin Comments Off on Justin Trudeau CRISIS latest: Canada PM ADMITS he failed in scandal that is rocking nation

September 27, 2018 Admin Comments Off on Conor McGregor shares ADORABLE picture of his son before BRUTAL showdown against Khabib