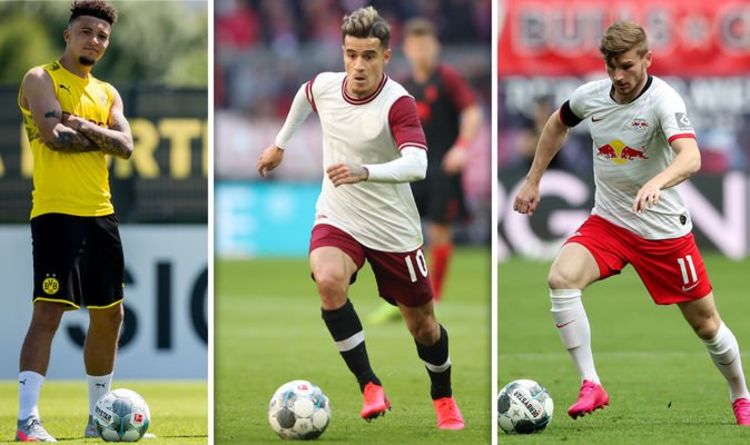 Manchester United are concerned about how it will look if they break their transfer record on Jadon Sancho immediately after the coronavirus.

United have been looking at Sancho as their star signing for the summer, and will have to pay over £100m to sign him from Borussia Dortmund.

But they are worried about how that would look with other clubs suffering financially.

Sancho would become the most expensive British player of all time should he make the move this summer.

United were expected to have a big summer this window but are also facing the prospect of losing money due to the virus.

They have also been linked with Jude Bellingham and a new striker.

Liverpool have spoken to Timo Werner and laid out their intentions of signing him, despite talk they won’t trigger his release clause this summer.

Werner has a release clause of £52m which is active until June 15, and it looks unlikely that Liverpool will trigger it before then.

But it actually drops in value next summer, so there is a chance Liverpool could try and negotiate a lower fee for the RB Leipzig man.

And according to Italian journalist Fabrizio Romano, Liverpool have been in contact with RB Leipzig.

He says they told the German club two weeks ago that they want more time to sign Werner.

Chelsea have decided to sign Samuel Chukwueze from Villarreal if they miss out on Jason Sancho.

Sancho looks set to join Manchester United if he moves this summer, and according to Goal Chelsea are eyeing the 21-year-old Nigeria ace should the miss out.

Frank Lampard is keen to add to his squad this summer as he looks to build a team capable of competing with Liverpool and Manchester City.

He missed out on transfers in the last two windows after the club were banned from signing players.

So Chelsea are expected to have a busy window when it does finally open up again.

Birmingham are expecting increased interest in Jude Bellingham when Championship football returns. The midfield ace has been linked with a move to Manchester United and Borussia Dortmund after impressing with the Blues.

Bellingham, 16, has been dubbed a ‘generational talent’ and was even lavished with praise by Rio Ferdinand.

Ole Gunnar Solskjaer is keen to bring him into his squad for next season as he plans for the future.

And Birmingham boss Pep Clotet thinks speculation will increase as football returns and more clubs get to have a look at Bellingham.

“Because of the current situation we have now, we possibly think we’ll be competing and playing games until July,” Clotet told Sky Sports.

“We are very focused on the present and there’s so much uncertainty in this situation that it’s very difficult to start thinking about next season.

“What I’m very happy about now is that Jude is here with us and all the players are here with us as well. We focus on that really, but I understand there’s going to be more speculation when the games do come back.

“As a head coach, I don’t deal with transfers, it’s the club. But I can imagine the situation has all the clubs very worried about how to finish this season and what impact this season has into next season.