An unprecedented cyclone hits a devastatingly poor country. At what point should other countries intervene?

For India, the answer was made easier by serendipity: it happened to have three naval vessels on a training mission in the Indian Ocean when Cyclone Idai struck Mozambique on March 14, killing more than 500 people in southern Africa.

New Delhi ordered the crews to divert. Three days after the cyclone hit, Indian naval officers were knocking on the shattered port of Beira and jumping into action. They helped rescue nearly 200 people and treat and feed many others. They also immediately started rationing on board to share their food and water with those affected.

Captain Varun Singh, a senior Indian naval officer, is convinced it was destiny: For one, on his own bucket list was the wish to save the lives of at least 200 people.

“Oh, I completely believe in destiny,” said the 48-year-old, a survivor of both combat and cancer.

He likely survived, he said, to help “the destitute of this particular place.”

The aid effort was a little less predestined where other countries further afield were concerned.

As the scale of the loss in Mozambique and other affected countries became clear, many nations began to mobilize funding or other support to help ease the recovery of a country long ravaged by poverty and corruption, and now overwhelmed by fresh catastrophe.

The number of cholera cases in Mozambique is climbing fast. The total number of cases reached 271 on the weekend.

More than a week into the crisis, Canada pledged a modest $ 3.5 million Cdn to humanitarian organizations working on the ground.

Some ascribe the shortage in funding to widespread international distrust of Mozambique’s government due to high levels of corruption in the country. 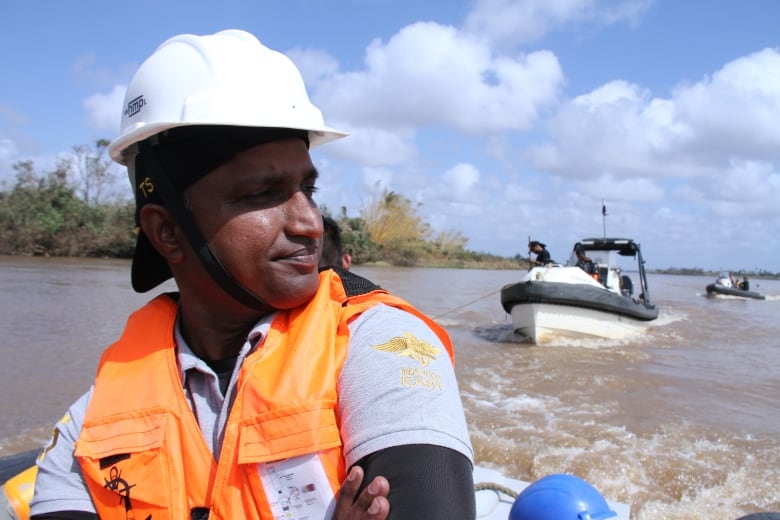 Others blame a distracted world that isn’t focused on a southern African nation in crisis.

“I’ve been fussing with the media around the world that all you want to talk about is Brexit, Brexit, Trump, Trump, and we’ve got people dying,” David Beasley, director of the World Food Program, told reporters during a visit to Beira last week.

Of the $ 140 million US the WFP requires to feed the needy for just three months, only $ 57 million US has been pledged so far. Of that, only $ 3.9 million US has actually been delivered. As a result, the organization has had to rely more heavily than usual on its own reserve emergency fund.

“Children are going to die and families are going to starve to death if we don’t get the supplies they need,” Beasley said of the situation in Mozambique.

Cyclone Idai was the worst weather-related disaster to ever hit the southern hemisphere, killing more than 700 people across southeastern Africa. Following the devastation, getting into the hardest hit areas has been a massive challenge. Mozambique, however, has got a helping hand from an unexpected source: India’s navy. 3:35

That partly explains why, even three weeks after the cyclone, Singh and his 650 men are still busy delivering aid to isolated communities, helping in the cleanup, and providing medical care.

Their main focus from the start was Buzi village, home to tens of thousands of people who were stranded and besieged by rising flood waters.

‘All the people were scared’

Initially, the only means to reach the village was from the air — with nowhere to land — or by water. Indian boats have made the five to six-hour roundtrip journey between Beira and Buzi at least twice a day since they arrived. They allowed a CBC crew to ride along to assess the damage.

At the entrance to the village, houses have been destroyed and abandoned, a tree leans heavily into the road, and a thick electric wire droops overhead.

“When the floods came … everything we had was damaged,” said Mohammed Gamu, a resident of the village.

Dulay Abdul Mamadi and his family survived the cyclone and the subsequent flooding. His house did not. He is now living with friends until he rebuilds. 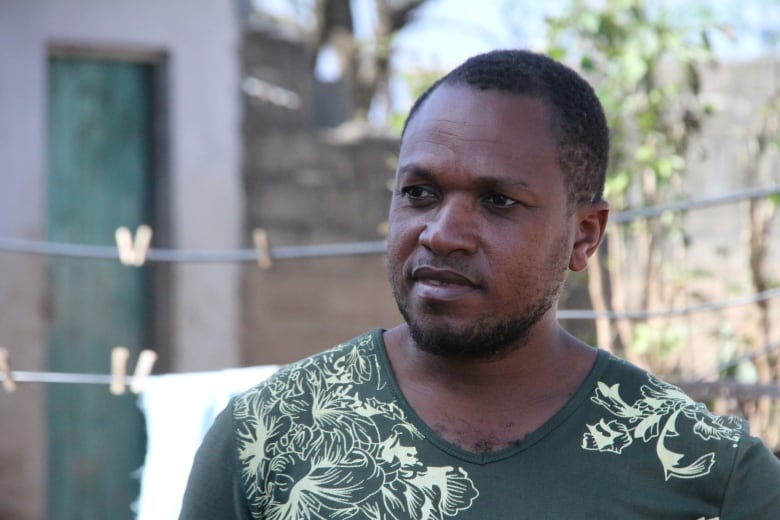 Dulay Abdul Mamadi, a resident of Buzi, says he lost his home in the deadly cyclone. (Nahlah Ayed/CBC News)

“It’s a bad thing. A bad thing. The wind was high, very, very high,” Mamadi said. “All the people were scared.”

Using high speed boats on constant rotation, Indian officers ferried nearly 200 people to Beira, a city that is also devastated, but had more to offer survivors than their own waterlogged village. Early on, the Indian teams always had more people trying to get into the boats than they could carry.

“People needed help,” said Singh. “Our presence, it was a great relief for them. The sight of somebody – they were sure now the relief will start coming in.”

Help did start arriving. Helicopters have started landing in Buzi with supplies. Those Indian boats are now using their twice-a-day visits to deliver much needed food and other supplies.

But residents say it’s still far from enough to feed everyone.

It is a problem everywhere you look in Mozambique.

At a quickly constructed displaced people’s camp near the Beira airport last week, a food distribution truck operated by World Central Kitchen handed out its last hot meal, with more than a dozen people, some with plates in hand, still waiting. An armed man in uniform tried to calm their anger. 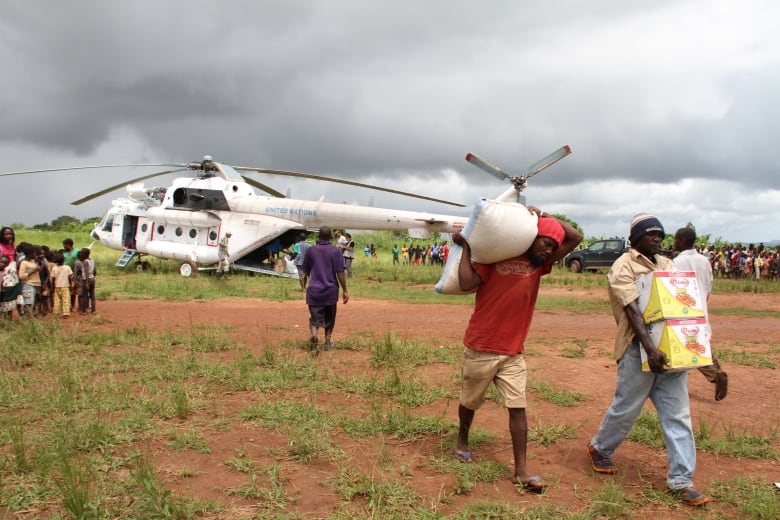 Many of the residents of the camp, named camp Ifapa and home to hundreds of people, are from Buzi. Survivors of the flooding there, both those who left and those who stayed behind, are joined by need — and frustration — over the wait.

Just a short walk away, the Beira airport is buzzing with aid workers, planes and helicopters trying to get supplies to where they’re needed.

The airport started off mostly abandoned after the cyclone, running on emergency power. It has evolved into a 24-hour nerve centre of international relief — home to foreign soldiers sleeping on cots, humanitarian groups working late into the night and medical tents set up on the grounds next to the terminal.

On the tarmac, a Russian Antonov plane sits a stone’s throw from a small U.S. jet, and a few steps from a South African helicopter.

The camp nearby reflects the international presence: U.K. aid tents, a water bladder provided by UNICEF, and food provided by World Central Kitchen.

Camp residents still have many needs, including help finding family members they lost in the chaos of the crisis — a problem exacerbated by the loss of electricity and downed telecommunications.

‘It could have happened to anyone’

At the camp, a group of local Red Cross workers provide telephones and a charging station, taking names to upload to a website that helps families reconnect – if they have access to the internet.

“Getting in touch with your family members is one of the basic needs people have,” said Diana Araujo from the Red Cross. It’s too early to know the extent of the separation problem, she added. 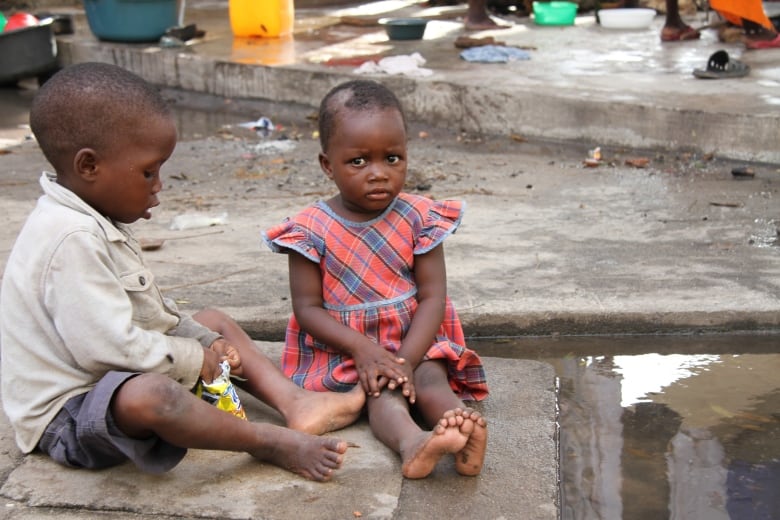 The government is still trying to count all those affected; the displaced, the separated, the unaccompanied children, the missing, and the dead. They are trying to open roads and restore communications. They need help with all that too.

They also need help with the estimated one million children affected in this crisis.

UNICEF was in Beira early and provided fuel and chlorine to help restore the water system city-wide, as well as distributing water and tents for shelters.

Yet in its own appeal to member countries, it has only managed to raise one-third of what it needs urgently for the next three months.

And it’s only secured a tenth of the $ 102 million US it needs to provide assistance for nine months, said Michel le Pechoux, deputy representative at UNICEF Mozambique. The longer term plan is essential, he said, given so many people have lost their livelihoods.

“So I think over the next few weeks there’s going to be some responses,” he said in an interview after leaving Beira. “But of course we’re not the only crisis. … Humanitarian response budgets are not stretchable.”

In addition to immediate needs, the $ 102 million figure UNICEF has appealed for is also aimed at emergency repairs to schools and health centres.

But for now, food remains the priority.

“The first thing is food,” said Gamu from Buzi village. “There’s no food for these people.”

As helicopters buzzed overhead, Singh joined his three boats as they made the morning journey last week to Buzi to bring more food and to assess the situation for himself.

They arrived carrying rice, sugar and oil to add to previous deliveries they made that included bedsheets, blankets and baby clothes.

“We need to be humble enough to understand the pain of others and … provide whatever assistance we can,” said Singh.

“It could have happened to anyone.”

The CBC’s Nahlah Ayed discusses aid efforts in Buzi, Mozambique, as well as what’s next for the region and village that experienced the worst of the flooding after Cyclone Idai. 5:27

Why the Democrats might be on track for a contested convention

February 17, 2020 Admin Comments Off on Why the Democrats might be on track for a contested convention

September 7, 2018 Admin Comments Off on Rescuers with dogs search for survivors after deadly Hokkaido quake kills at least 16