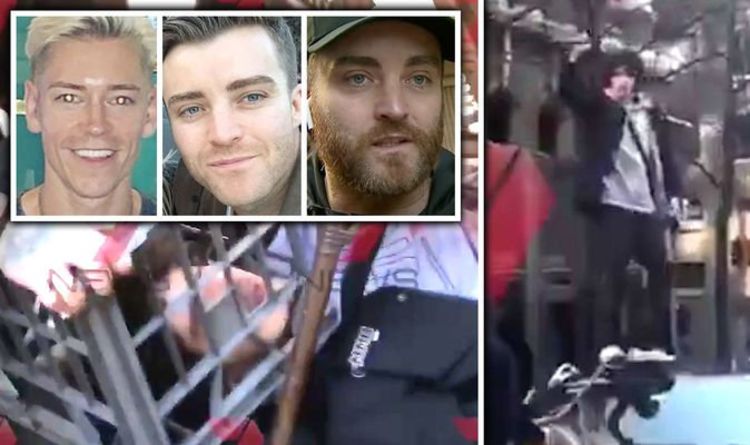 One woman was attacked, New South Wales police have confirmed. Witness have said they saw a man carrying a knife and attacking people but police have not confirmed reports of any injuries. The man has since been arrested as footage on Twitter shows him being held to the ground.

Footage online shows bystanders pin down the man using chairs and a crate.

There also appears to be blood stains on his clothes.

The man is seen standing on a car at one point.

One witness, Marcon, told the Daily Mail Australia: “He was trying to smash a driver side window of a random car with the knife. He was unsuccessful.

“People were chasing him by that stage. There was fireys chasing him with axes and he went around the corner.

“I think he was trying to smash the driver side window on a random car.”

An Uber driver added: “I was next to a fire truck in York Street and he jumped on the bonnet of my car. He crashed across the bonnet and had a knife in his hand.

“There was blood on his shirt. People had their phones out and there was police.”

New South Wales (NSW) police have said: “A man is in custody after allegedly stabbing a woman in Sydney’s CBD this afternoon.

“Police and NSW Ambulance paramedics located a woman inside a hotel, who had a stab wound. She has been taken to hospital in a stable condition.

“Members of the public detains the man before police attended and arrested him.

“He has since been taken to Day Street Police Station.”

Elsewhere, the body of a woman has been found at a unit on Clarence street.

But police have not confirmed whether the death is linked to the stabbing.

A statement from NSW Police said: “Inquiries are underway after the body of a woman was found in side a unit on Clarence street, Sydney, about 3.15pm today.

“Officers from Sydney City police area command are on the scene and will conduct inquiries into whether the incident is linked to an earlier stabbing at a hotel on the corner of Clarence and King st.”

July 5, 2019 Admin Comments Off on Russia scrambles fighter jet to intercept US ‘spy plane closing in on Crimea’

World War 3: US fears China to wage SPACE WARFARE after historic far side of Moon landing

January 6, 2019 Admin Comments Off on World War 3: US fears China to wage SPACE WARFARE after historic far side of Moon landing

EU at war! Brussels threatens Italy with RANSOM if it pulls out of French rail project

February 15, 2019 Admin Comments Off on EU at war! Brussels threatens Italy with RANSOM if it pulls out of French rail project