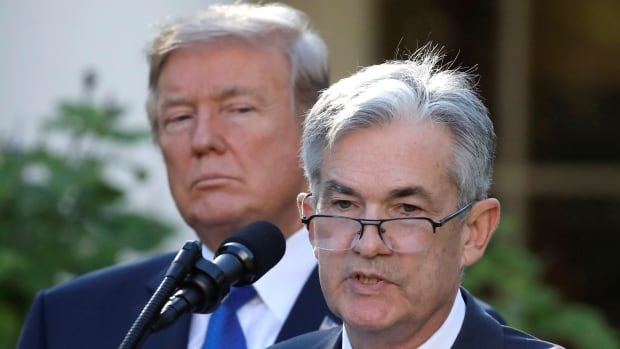 Stock markets sold off on Friday as Donald Trump angrily ordered U.S. companies to stop doing business with China and accused his own central banker of being an “enemy” to his economic plan.

Speaking at an economic retreat in Jackson Hole, Wyo., on Friday, Federal Reserve chair Jerome Powell said there’s increasing evidence of a global economic slowdown and suggested that uncertainty from the U.S. president’s trade wars has contributed to it. He also suggested the trade war Trump started with China is making it harder for central bankers to do their job.

“Trade policy uncertainty seems to be playing a role in the global slowdown and in weak manufacturing and capital spending in the United States,” Powell said in his speech.

The U.S. central bank cut its benchmark interest rate for the first time in a decade earlier this month, an indicator that it feels less confident in the prospects for the economy.

Trump welcomed that move and is trying to push the Fed to cut rates even more, but so far the Fed has publicly tried to maintain its independence.

Trump reacted angrily to Powell’s speech, tweeting shortly after it ended that the central bank is “very weak” and shouldn’t be speaking without consulting him first. He also seemed to accuse Powell of being an “enemy” of the U.S.

….My only question is, who is our bigger enemy, Jay Powell or Chairman Xi?

Economist and author David Jones said such an attack on a Fed chair sets a dangerous precedent.

“This challenges something that has been sacred in the history of the world’s most successful central bank,” Jones said. “The central banks that have been successful are those which are independent of political pressures and were free to make the appropriate monetary policy.”

Trump’s tweet-storm prompted a sell-off on the stock market, as investors who had initially liked the sound of Powell’s speech quickly sold off shares as the rhetoric ratcheted up.

Trump went on to “hereby order” U.S. companies to seek alternative markets to China, which announced a new round of tariffs against American goods earlier Friday.

The National Retail Federation, which represents U.S. retailers, said any such plan would be next to impossible to implement.

“Retailers have been diversifying their supply chains, but finding alternative sources is a costly and lengthy process that can take years,” the NRF said. “It is unrealistic for American retailers to move out of the world’s second largest economy, as 95 per cent of the world’s consumers live outside our borders.”

Stocks in all three companies were lower as investors digested the logistics of implementing such an order.

The Twitter tirade pushed stock prices lower, as the Dow Jones Industrial Average was down more than 700 points at one point, before closing down 621 points, to 25,630.

Trump also promised he would have more to say in response to Chinese tariffs later on Friday, but by the time stock markets closed at 4 p.m. ET he had yet to update his original comments from midday.

December 12, 2019 Admin Comments Off on Chilean air force finds debris believed to be from missing plane