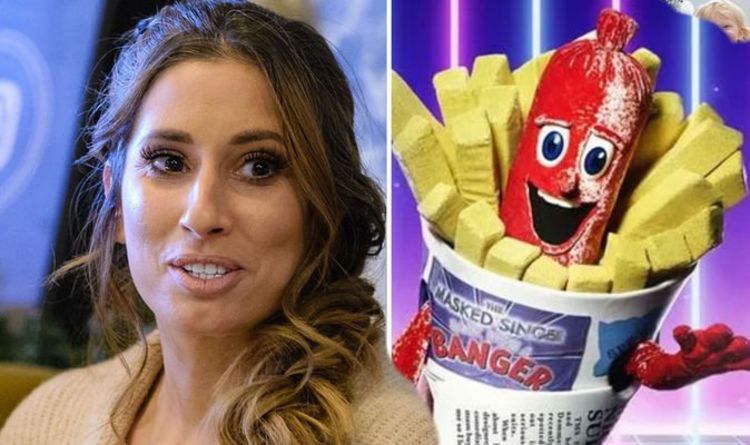 The Masked Singer UK returned to screens tonight with all eight remaining celebrities performing once again, in a bid to keep their identities a secret. Following the Sausage’s performance, fans were quick to speculate it could be Stacey Solomon, 31, behind the mask. The mother-of-three has been linked to the Sausage since the start of the series and has refused to confirm or deny if it is her.

Today, she was noticeably absent from her Instagram and hasn’t addressed the new speculation.

The Loose Women star told fans earlier this week she will be taking a break from her page this weekend.

Express.co.uk has contacted a representative for Stacey for comment.

New clues about Sausage were unveiled tonight, including the singer being called “a horse” and hiding behind a mask in previous times.

Tonight, Stacey was in the mix of names linked to the hidden celebrity once again.

Taking to Twitter, one fan wrote: “SURELY sausage is Stacey Solomon that laugh is so recognisable #MaskedSingerUK.”

A fourth added of the Sausage: “I still think Sheridan Smith… but the clues this week lead me to Stacey Solomon. #MaskedSingerUK.”

Stacey was asked about the speculation on a recent episode of Loose Women alongside her husband-to-be Joe Swash.

Last week, former footballer Glenn Hoddle was unveiled as the celebrity behind the Grandfather Clock.

Ahead of this, Martine McCutcheon was exposed under the Swan costume.

Speaking out about the secrecy on the show, the actress admitted she was forced to ignore her friend Louise Redknapp after the latter guessed it was her.

The singer sent a text to Martine to ask if it was her after telling Twitter fans she recognised the voice.

Addressing this on This Morning, the EastEnders actress said: “I felt so bad because she was texting me, ‘It is you?’ And I was like, I’m under contract I can’t say.

“I was just ignoring her, it was annoying, I didn’t know what to do.”

November 19, 2020 Admin Comments Off on Shane Richie: I’m A Celebrity star’s remorse for doing ‘blackface’ acts at start of career

Alex Jones: ‘I’m not sure’ The One Show host makes cheeky bedroom admission

March 14, 2019 Admin Comments Off on Alex Jones: ‘I’m not sure’ The One Show host makes cheeky bedroom admission

May 12, 2020 Admin Comments Off on Dan Walker: BBC host reignites feud as ITV rival Piers hits back with ‘harsh’ remark