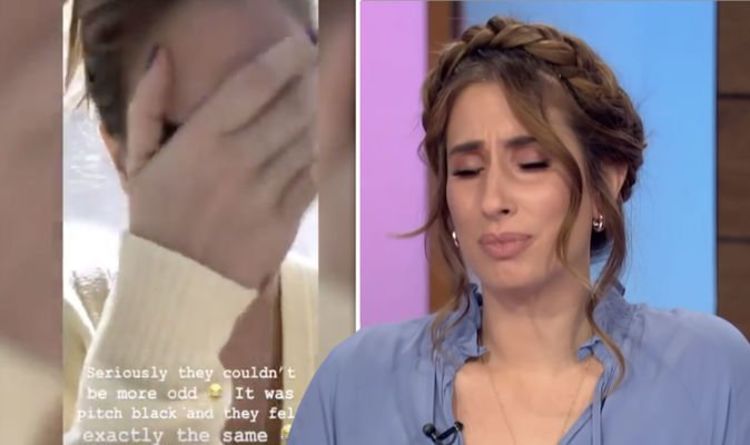 Stacey Solomon, 30, sent her 2.3 million Instagram followers a good morning message on Thursday as she filmed herself bare faced preparing for the daily installment of Loose Women.

In her Instagram story she revealed she wasn’t feeling herself as she sat in her dressing room at the ITV studios.

“Good morning!” she greeted her followers.

“I just feel rough, so rough!”

“I’m not eating properly, I’m not drinking enough water and I’m not looking after [myself].”

Appearing to be run down, the Dagenham beauty giggled and admitted she had made a grave error when getting dressed.

“I got dressed in the pitch black this morning,” she said.

“But this morning I managed to walk out of the house not only in my slippers, but ODD slippers,” she panned the camera down to her feet, revealing her mismatched footwear.

“It was so dark, I didn’t want to wake anyone up so I just left everything black!” She moaned, holding her head in her hands before asking for help.

Stacey and boyfriend Joe Swash, 37, welcomed their first child together earlier this year.

After initially getting over the shock of leaving the house in different coloured slippers, the mum of three went on to show her followers some of the gifts that fans had sent their new bundle of joy.

“Someones’s just dropped in some cards and messages and little bits for Rexie that people have sent in and it honestly makes my day, thank you so much,” she excitedly thanked her fans.

The TV personality held up a little green bib with an embroidered R stitched into it, adding: “Some little bibs, so cute!”

Someone else had sent in some dungarees which left Stacey almost in tears.

“This is so adorable, they’re little dungarees and in glitter writing it says ‘believe’.”

“I’m so over tired and very over emotional the world ‘believe’ in glitter is making me want to cry,” she continued, welling up.

But it wasn’t long before Stacey was out of her mismatched footwear and into some leopard print heeled sandals ready to debate current issues with the rest of the Loose Women team.

On the show the ladies discussed whether parents who don’t vaccinate their children should be fined, as measles cases are on the rise in the UK.

As new parents, both Stacey and Christine Lampard voiced their opinions, with Stacey saying it was a “personal decision” for the parents.

Christine admitted she had suffered with all sorts of childhood viruses from measles to mumps and took the approach that if someone could take it away, why not let them as it’s an “awful” thing to have.

Poll results showed that 70 percent of viewers said parents should be fined for not vaccinating their children.

Duffy, 35, tells fans she was raped, drugged and held captive for days in brave post

February 26, 2020 Admin Comments Off on Duffy, 35, tells fans she was raped, drugged and held captive for days in brave post

January 27, 2019 Admin Comments Off on Brooklyn Beckham had ‘secret fling’ with Rita Ora which mum Victoria ‘didn’t approve’ of