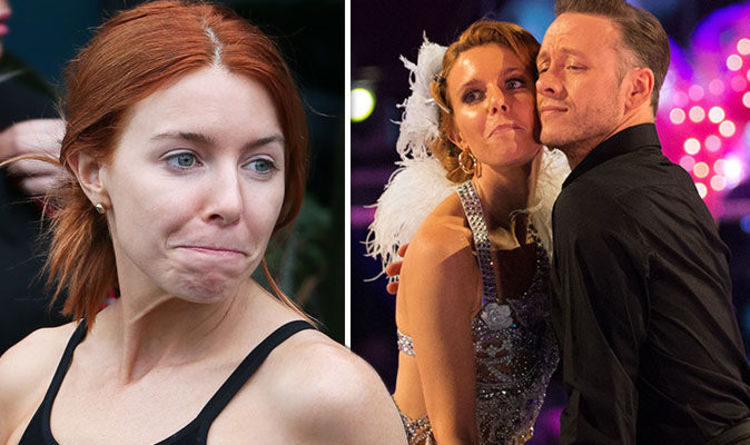 Away from Strictly Come Dancing, Stacey Dooley is most known for her documentary work in programmes like BBC Three’s Stacey Dooley Investigates.

Since 2008, the 31-year-old has investigated a wide range of issues including gay conversion therapy camps in America and the effect of the fashion industry on the environment.

And Stacey admitted the show has been an “amazing” remedy to her “harrowing” job.

She told the Press Association her experience of appearing on the BBC One competition had been “so far removed” from her day job, which she described as “intense” and “serious”.

Spilling why she signed up to the show, she said: “One of the reasons I said yes to doing Strictly is because it is so far removed from what I do for a living ordinarily.

“I love my job but it’s intense and it’s serious and it’s straight.

“It can be really harrowing and Strictly is so celebratory and so flamboyant and so camp and so amazing but still so classy.”

This weekend, Stacey and Kevin, 36, will be performing the Tango to the Doctor Who theme tune.

Kevin will be playing the part of a Cyberman and Stacey will take on the role of Jodie Whittaker’s Time Lord.

However, as Jodie now plays the female lead, so will Stacey as she takes on the lead role in the dance in a major shake-up.

Stacey will lead her professional partner Kevin around the dance floor which is normally withheld for the male dancers.

Explaining all about tomorrow night’s routine, Stacey told It Takes Two host Zoe Ball this week: “This Saturday Zoe, I’m going to be Doctor Who. It could go two ways, it depends what happens in wardrobe.

“It’s nice because we’re playing with the routine a little bit because we’re looking at the fact that she’s the first female Doctor.

“She’s fierce and she’s her own independent woman and got it going on, so we’re trying to incorporate that. It’s exciting.”

Kevin added the role reversal will be a first for the BBC show.

He said: “It’s a role reversal because she’s playing what has been a male role for so many years.

“We’re actually playing with that within our Tango – that Stacey’s going to be dancing some of the male roles and I’ll be dancing the female parts.”

The pair have been a hit with the judges and viewers so far and it seems Kevin is also completely blown away by Stacey.

On the BBC Two show, the Grimsby born star said to his celebrity partner: “I really couldn’t ask for a better partner. You’re like, you’re brilliant, I just love working with you.”

Strictly Come Dancing continues Saturday on BBC One at 6.50pm.

June 2, 2020 Admin Comments Off on Dan Walker: ‘Let’s not lose our heads’ BBC host pleads with public after lockdown ‘issues’