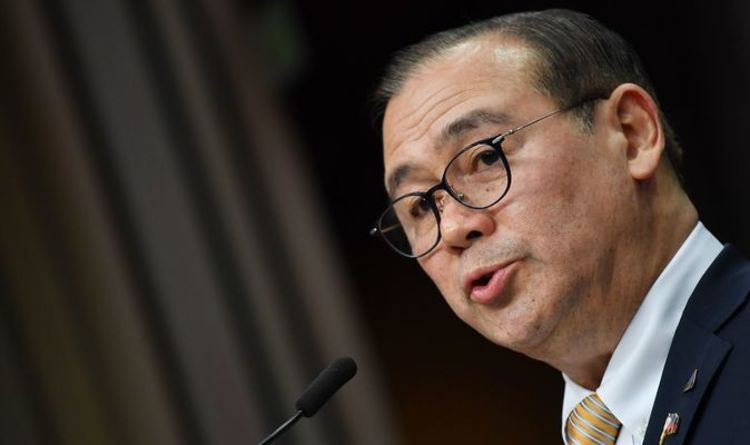 Teodoro Locsin, the country’s Foreign Affairs Secretary, said this week the country was planning to “swarm” parts of the disputed waters. It comes just days after the US blasted Beijing for what it called “illegal” fishing operations in the Pacific Ocean.

China is said to operate the largest fishing fleet in the world.

The country operates at least 2,900 boats which operate outside of China’s own waters, Eco-Business claims.

Mr Locsin said: “We are swarming the areas because that’s the Chinese strategy– to swarm the areas also with the fishing boats.”

Responding to Mr Locsin’s comments, Wang Wenbin, Foreign Ministry Spokesperson for China, defended China’s “sovereignty, rights and interests in the South China Sea,” which he claimed are “grounded in history and law”.

He added: “China stands ready to work together with ASEAN countries including the Philippines in the same direction to jointly uphold peace and stability in the South China Sea.”

Last year, US Secretary of State Mike Pompeo indeed appeared to confirm the US would protect the Philippines in the event of a South China Sea conflict.

Mr Pompeo pointed to the Philippine-US Mutual Defence Treaty, which was signed in 1951, as the basis for his assurance.

He also pointed to China as one potential threat to the Philippines.

The US diplomat said: “Any armed attack on Philippine forces, aircraft or public vessels in the South China Sea will trigger mutual defence obligations.

“China’s island-building and military activities in the South China Sea threaten your sovereignty, security and therefore economic livelihood as well as that of the United States.”

He made his comments during a news conference in the Philippines’ capital Manila.

He said the US would be “strengthening” its policy regarding the region, adding: “Beijing’s claims to offshore resources across most of the South China Sea are completely unlawful, as is its campaign of bullying to control them.”

He also spoke specifically about the Philippines, claiming Beijing was carrying out “harassment” of Philippine fisheries as well as development of the nation’s offshore energy.

The Philippines is not the only nation to be alarmed by Chinese fishing vessels recently.

EU crisis as thousands block Berlin roads in fury at EU subsidies ‘we are fed up!’

January 20, 2020 Admin Comments Off on EU crisis as thousands block Berlin roads in fury at EU subsidies ‘we are fed up!’