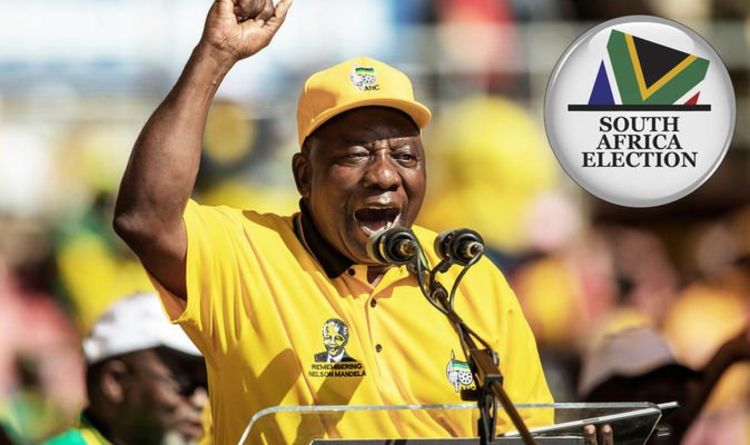 The Electoral Commission of South Africa is yet to formally announce the final results but local media is reporting all votes counted and it’s clear the African National Congress (ANC) has retained its grip on power. The result was expected but, after 25 years in power, this is the worst result a floundering ANC has seen yet. Now, President Cyril Ramaphosa has a chance to prove he has what it takes to restore faith in the party – but the challenges that lie ahead of him are immense.

The official opposition, the Democratic Alliance (DA) came in with 20.76 percent, and the Economic Freedom Fighters (EFF) bagged 10.79 percent of the vote.

Here is a breakdown of seats held by party in the 400-seat parliament:

President Ramaphosa – who replaced scandal-plagued Jacob Zuma last year – will see his first full-term presidency begin later this month, after a nomination by his party’s parliamentary caucus and an inauguration ceremony.

While Mr Ramaphosa and his supporters will celebrate the win, there will be little time for rest as the steadying decline in support for ANC is more evident than ever after these latest results.

The president now faces the challenge of restoring the party – once the bastion of freedom fighter Nelson Mandela, who Mr Ramaphosa worked closely with – to its former glory, and one citizens can trust.

After casting his vote in Soweto on Wednesday, Mr Ramaphosa said: “We’ve made mistakes, but we are sorry about those mistakes, and we are saying our people should reinvest their confidence in us.”

Challenges lie ahead both within his party and beyond: Mr Ramaphosa must pick apart a party which includes some at the highest echelons remaining loyal to Zuma, as well as restore the economy which lies in tatters.

Rampant poverty, unemployment, crime and housing shortages are just a few on the list of woes facing the majority of South Africans, in a country where racial inequality still divides the population.

There are still those within the party who are aligned with the former president’s rampant state capture regime who would see Mr Ramaphosa ousted.

Amongst them, the secretary-general Ace Magashule and deputy president DD Mabuza, who critics fear would continue down the road forged during the Zuma era.

A veteran South African journalist, who declined to be named, told Express.co.uk: “These results have bought time for Cyril Ramaphosa to act decisively: on corruption, on an internal party fightback from Zuma, Magashule and their allies, and on the economy.”

He added the Zuma allies are “bitter about Zuma’s humiliating exit from the presidency, want to carry on gutting the state and don’t like Ramaphosa because he stands in their way. They also want to stay out of jail.”

The economic reforms needed to rescue the sinking ship are vast.

The Express source said: “Ramaphosa has to undo the disastrous effects of the Zuma years, in which a combination of idiotic populist moves – free university education, expropriation of land without compensation – and corruption brought it to its knees.”

While the challenge at hand is tremendous, the president does have support within the country and there are those who believe he has what it takes.

The Express source added: “The mandate he has been given is reinforced by the fact that his personal popularity is almost certainly greater than that of the party.

“But he needs to act soon and act decisively if he is going to turn around the party and, more importantly, the country.

“His courage is going to be tested mightily in the next year or so.”