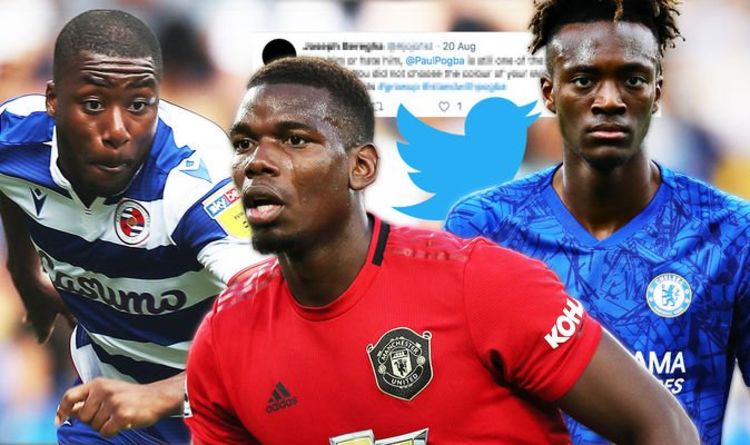 The depressing instances of a black player missing a penalty and then being racially abused by deadbeats on social media have supplied a tawdry backdrop to the start of the football season.

Manchester United’s Paul Pogba, Chelsea’s Tammy Abraham and Reading’s Yakou Meite have all been on the receiving end of the keyboard cowards.

Twitter have promised to proactively monitor the traffic heading the way of 50 of the most prominent black footballers in the country but man-marking will only go part of the way to dealing with the problem.

By the time the filth is spotted and taken down it has already been out there. Someone, somewhere – maybe even the player or a member of their family – has been contaminated by it.

Job done for the scumbag alone in his bedroom.

Racism used to be out there as a visible and audible part of a dark and dismal terrace culture. Thankfully the bananas and monkey chants were driven away. They became socially unacceptable.

That line still holds in the main. When Raheem Sterling was abused at Stamford Bridge last season it came as a shock and Chelsea acted strongly in banning six supporters.

The problem though has resurfaced on a different platform and with grim regularity.

Twitter has blamed societal reasons for racism’s return to football.

It is a valid point. Whichever side of the Brexit argument you take, it is an uncomfortable truth that this country has become a less tolerant place since the referendum campaign.

But it is social media which has evolved into the vehicle of choice to deliver hate direct to the target and for that the companies involved must shoulder more responsibility.

To say they are merely the conduit for others’ failings is not good enough.

Twitter have passed on this season’s cases to the police. If the individuals are caught and convicted, it would be instructive to arrange some sort of restorative justice.

Imagine just how small the perpetrator would be made to feel in the presence of a multi-talented, multi-lingual athlete like Pogba. Just how pathetic and empty would he – and it is always a he – feel when confronted with such a confident, powerful figure.

Conspicuous success from a man earning millions doing a job he loves on one side, abject failure on the other.

But it shouldn’t have to be the responsibility of a Pogba to deal with this sort of garbage.

The social media companies can, and should, do more.

Phil Neville’s call for a six-month boycott of them by footballers would be one response but that is unlikely to happen because of the commercial pressures to promote their sponsors on their social media outlets.

In any case such a stance would punish the vast majority of decent fans who, for some reason, enjoy the banal faux-interaction with their heroes.

What needs to be done is to stop the racist trolls at source. The answer to that is to strip away their cloak of anonymity.

A requirement for every user to register for an account with their real name and national insurance number would bring everyone out into the light.

The racists may still think the same way, they may still type their bile but the knowledge that they would be guaranteed consequences for their actions would give them pause for thought before pressing send.

If they went ahead and spread their poison, they would be permanently banned and lose their voice forever.

It wouldn’t just be the football world which would be a better place for that.