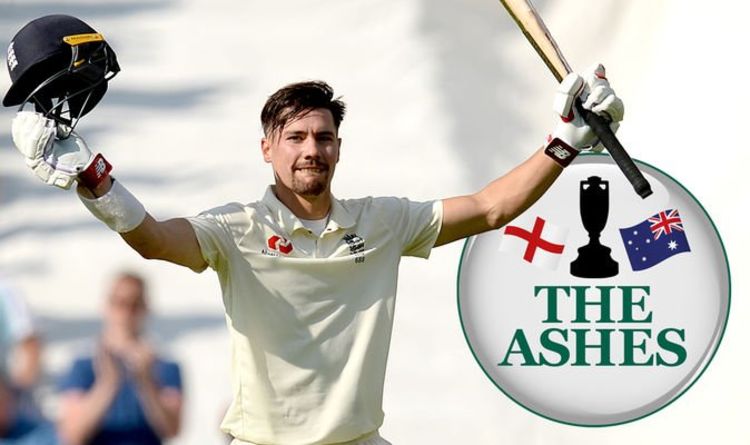 Having seen the visitors fight back from 122-8 on Thursday to reach 284 all out, there was pressure on England’s top order.

The first three batting positions have proved to be a problem for the Three Lions with captain Joe Root moving up to three for this Test.

And while Jason Roy went early for ten, there were no issues for his opening partner Burns.

Granted, there were some near misses with the 28-year-old given not out when Hawkeye proved he should have been lbw to Nathan Lyon.

There were also plenty of edges down to third man but the Surrey batsman rode his luck to make his maiden Test century.

Burns struggled against Ireland last week and after a week of hard work, he was relieved to make his first Test ton.

“It was quite an enjoyable experience that – different from the Ireland Test,” Burns said.

“It was a really good experience with the crowd rocking.

GET ALL OF YOUR LATEST ASHES NEWS HERE

“A lot of hard work [has gone in to this] from coaches, parents, so credit goes to them really.”

Around Burns, Root scored a fine half-century as he put on 132 with the Surrey man.

Root had survived an early scare when he was given out caught behind.

The captain reviewed the decision with replays showing the ball actually grazed the off-stump, though the bail was not removed.

Joe Denly made 18 while Jos Buttler edged to slip on five.

But the day belonged to Burns, who will be looking to keep going on Saturday.

“I’ve been trying to embrace opportunities,” he added. I wanted to put myself in a better position to take that opportunity.

“I was struggling with my rhythm as Lord’s, I was trying to find a way to get that good feeling back.

“I don’t think you’d coach many kids to bat like I do but sometimes you’ve got to get into a battle in a scrappy way and come through.”

It proved to be a hard slog for Australia’s four-man attack – Matthew Wade ended up bowling an over with Travis Head given two.

Peter Siddle was arguably the pick of the Australians, taking 1-43 for the day with James Pattinson picking up two wickets.

But the third day of the Test, often labelled ‘Moving Day’, will be vital.

“I thought England deserve credit for the way they played.

“We put the ball in good areas but couldn’t find the edge. It is a tough days cricket. We have to brush ourselves and go again tomorrow.”

WWE Clash of Champions: When will Seth Rollins and Bray Wyatt fight after shock attack?

September 16, 2019 Admin Comments Off on WWE Clash of Champions: When will Seth Rollins and Bray Wyatt fight after shock attack?