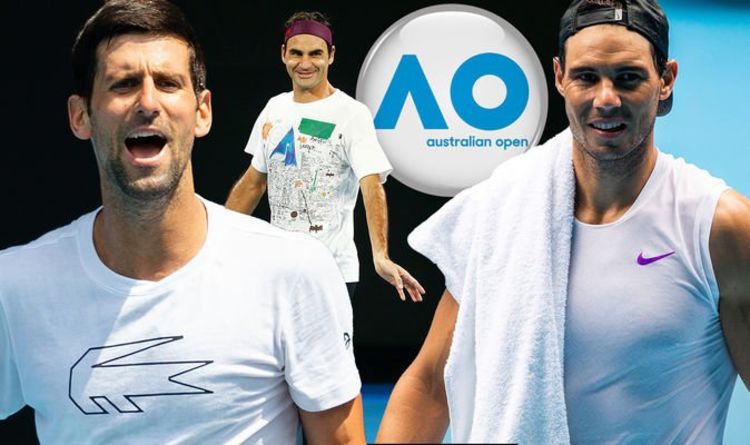 Roger Federer has been drawn in the same half as Novak Djokovic in the draw for the Australian Open while Rafael Nadal could potentially meet Nick Kyrgios in the fourth round. Djokovic, the defending champion, will play Jan-Lennard Struff while Nadal will start his campaign against Hugo Dellien in the opening round.

Roger Federer will play American Steve Johnson in the first round.

The stage is then set for some mouthwatering last eight matches with Djokovic projected to played ATP Finals champion Stefanos Tsitsipas and a French Open final rematch between Nadal and Dominic Thiem.

From a British perspective, Kyle Edmund will play Dusan Lajovic in the first round, Dan Evans meets Mackenzie McDonald and Cameron Norrie will play Pierre-Hugues Herbert.

Evans is on collision course to face Djokovic in the third round, should both players reach that stage.

Djokovic has started the 2020 season in great form after winning all eight matches at the ATP Cup as he led Serbia to victory.

One player absent from the draw is home favourite Alex de Minaur, who was forced to withdraw from the event with an abdominal tear.

“Obviously it’s a week of the calendar that I really look forward to and put in all the hard work for, so it’s pretty devastating to miss out on my home Slam.

“I wanted to go out there and play, even though I’ve got a four-centimetre grade two tear. So it’s not a joke -– it’s something really serious. Getting out of bed hurts, everyday activity it hurts.

Andy Murray is also absent from the event with a pelvic problem.

Meanwhile Liam Broady has hit out at organisers for continuing qualifying despite the poor air quality due to the bush fires in Australia.

“The more I think about the conditions we played in a few days ago, the more it boils my blood. We can’t let this slide,” he wrote on Twitter.

“The email we received yesterday from the ATP and AO was a slap in the face. Conditions were ‘playable’. Were they healthy? Citizens of Melbourne were warned to keep their animals indoors the day I played qualifying, and yet we were expected to go outside for high intensity physical competition?

“What do we have to do to create a players’ union? Where is the protection for players, both male and female? When multiple players need asthma spray on court and they don’t even have asthma? When a player collapses and has to retire due to respiratory issues?

“On tour we let so many things go that aren’t right but at some point we have to make a stand. ALL players need protection not just a select few.”

Tournament organisers insist they are taking the issue very seriously and only sent players out on Tuesday after being advised by experts that it was safe to do so.

But notably play was delayed for longer on Wednesday despite very similar conditions while Dr Brett Sutton, the chief health officer for the state of Victoria, said the tournament should come up with a clear policy.

Although air quality has now improved, there remains the distinct possibility the smoke could return during the tournament.

Eighteen-time grand slam singles champion Chris Evert believes the health of players must be the priority.

The ESPN analyst said: “It is a health issue, and especially when it gets on to three out of five sets and you’re out there for a long time. You want to be able to breathe some clean air.

“I think that they really have to keep a close eye on it. The tournament seems to be such a small sort of thing compared to what’s happening in the country but I would put the players’ health first for sure and, even if they had to play at a different time, it doesn’t matter. We’re talking about lives.”

May 30, 2019 Admin Comments Off on Eden Hazard CONFIRMS Chelsea exit after 4-1 Europa League thrashing of Arsenal

May 2, 2019 Admin Comments Off on Gary Lineker responds to angry Liverpool fans over celebration after Lionel Messi goal