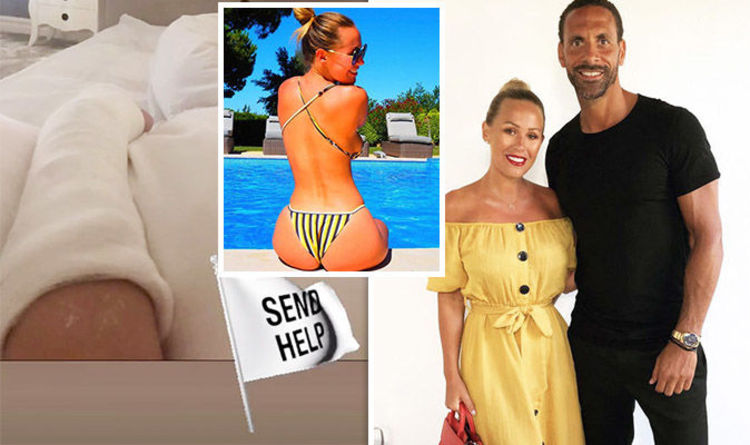 Former The Only Way Is Essex star Kate Wright revealed she had suffered a bad accident which left her with two broken bones and a dislocated wrist.

The partner of retired footballer Rio Ferdinand jokingly begged her followers on Instagram to send for help when she uploaded a picture of her bandaged limbs.

Kate, 27, posted a picture on the photo-sharing website of her painful-looking injury with the caption: “Two broken bones and a dislocated wrist… send help.”

The TV personality appeared to be lying on a bed when the photograph was taken and her dog could be seen perched on a set of white beddings.

It is unknown how the blonde beauty injured herself, but she will likely be taken care of by her loving boyfriend Rio, 39.

The pair have been seeing each other for more than a year and regularly share photos of themselves on dates together or out with his children.

Kate recently poked fun at Rio for appearing drunk in a photo taken of them enjoying a night out at the end of last month.

In the snap, Rio looked tired and seemed to be dozing off in the cab of their taxi, meanwhile Kate was wide wake and alert when the picture was taken.

Alongside the hilarious photo, she wrote: “All OK babe? Have you had one too many”, followed by a series of laughing face emojis.

Her witty remark went down a treat with fans, with one of her followers writing: “This is so funny nice to see Rio is down to Earth. So glad you got in a black cab.”

Another joked: “Rio you legend! Best of luck Kate,” while a third gushed: “You are my favourite couple of all time. So genuine and in love.”

Kate, who met former BBC football pundit Rio in early 2017, recently confessed to having no real interest in football despite her partner making a career out of it.

In an interview with You Magazine back in August, Kate admitted: “I’m not into it at all. People think it’s weird, but everywhere Rio goes people talk football to him.

“So I think he finds it quite nice not to have me going on about it.”

The reality star also said she never imagined she would be a stepmom but said she has fallen in love with Rio’s children.

Meanwhile, her famous ex-boyfriend Dan Edgar is currently dating TV star Amber Turner, who he was on-and-off with for two-years.

Amber resembles Kate in many ways as she has long blonde hair, a stunning figure and is also a star of the ITV reality show TOWIE.

The 25-year-old beauty recently posted a behind the scenes picture from her shoot with Dan, 28, in Sardinia, an island in the Mediterranean Sea.

Amber and Dan were matching in black outfits and captured the beautiful scenery from atop a cliff.

Emily Maitlis: Newsnight host speaks out to address criticism ‘I annoyed myself with that’

October 5, 2020 Admin Comments Off on Emily Maitlis: Newsnight host speaks out to address criticism ‘I annoyed myself with that’