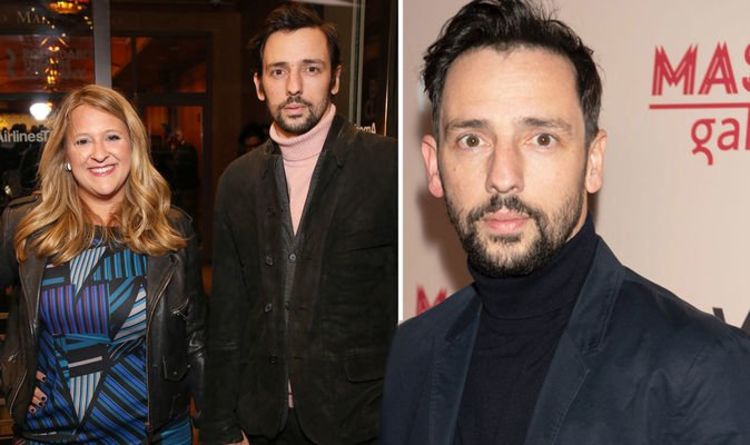 Death In Paradise’s Ralf Little, 41, laughed as he claimed a series of romantic gestures in the lead up to the proposal were ruined by his fiancee Lindsey Ferrentino as she kept asking questions. Ralf decided to pop the question on her 30th birthday, but recalled how the day was far from plain sailing.

Speaking alongside his friend and fellow podcast host Will Mellor, he began by revealing he didn’t buy the engagement ring as he was handed her grandma’s vintage ring instead.

“No ring, I thought great this is going to be an easy choice,” he joked.

After seeking her parents permission to propose to her, he decided to get a plan into action.

The actor said he had booked an afternoon tea, a spa as well as a helicopter ride for the special occasion.

In the lead up to the proposal, Ralf said Lindsey was asking so many questions about his plans and insisted they should go home instead during a long car journey.

He joked: “I was like, ‘Shut up I’ve got plans stop ruining them’.”

The actor surprised his wife-to-be with a helicopter ride around the likes of Bath and Bristol and landed at a country house where they tucked into an afternoon tea.

But much to her dismay, the actor said she had a “panic attack” as they flew over a cliff of the coast.

Ralf added his wife-to-be eventually calmed down as she got used to the ride.

“The funniest thing is, I have it on camera, but she said I’m never allowed to show it to anyone, she’d never been in a helicopter before, she had a panic attack,” he added.

Recalling the moment he proposed, Ralf said he hid the ring in a scone they had at the afternoon tea.

But, by the time she got to that particular scone she told him she was full up.

Lindsey then proceeded to cut up the scone and swiftly discovered the ring as he got down on one knee.

On her reaction, he continued: “[She said] ‘Are you serious? This is ridiculous’ and then she burst into tears.”

Reflecting on the day, he went on to say: “Every one of my romantic gestures was like scuppered by her asking too many questions and then crying.”

Ralf added on the Two Pints with Will & Ralf podcast that the pair are yet to set a date for their wedding day.

“Mine is more a long term sort of vibe,” he joked of his engagement as Will said he tied the knot within a year of proposing to his wife Michelle McSween.

James Jordan: ‘Why would she say that?’ Strictly star slams Shirley Ballas’ ‘favouritism’

December 1, 2019 Admin Comments Off on James Jordan: ‘Why would she say that?’ Strictly star slams Shirley Ballas’ ‘favouritism’