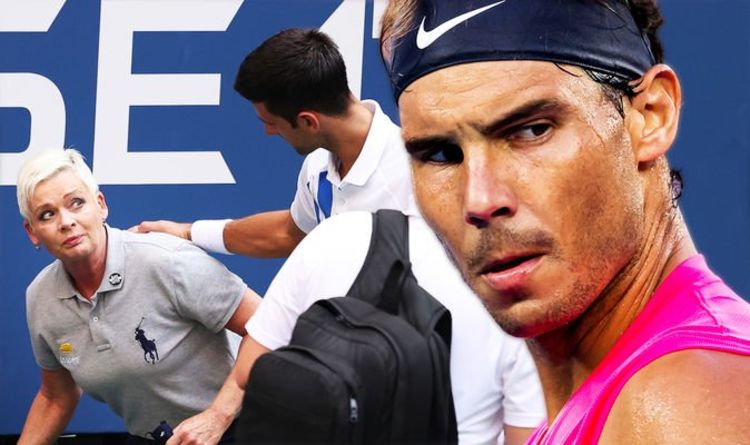 Rafael Nadal has told Novak Djokovic he must have more self-control after the world No 1 was disqualified from the US Open last week for hitting the line judge with a stray ball.

Djokovic was frustrated after being broken in the 11th game of the first set against Pablo Carreno Busta.

The Serbian took one of the balls out of his pocket and hit it towards the back of the court, striking the line judge in the throat.

Tournament directors had no choice but to immediately disqualify the 33-year-old from the competition and strip him of his prize money.

Djokovic will return to action at the Italian Open this week as the clay season gets underway.

And second seed Nadal has warned his long-term rival he must improve his attitude.

The Spaniard will return to action for the first time in six months when he takes on his fellow countryman Carreno Busta in Rome.

Djokovic will look to get over his recent disappointment when he faces the winner of Tennis Sandgren vs Salvatore Caruso.

“I understand I have outbursts and this is the personality and the player that I have always been,” Djokovic said.

“I cannot promise or guarantee I will never ever do anything similar to that in my life. I am definitely willing to try my best so that something like that never happens again.”

“The ball hits a line judge, it was just unfortunate that I hit the umpire in a very awkward place.

“I checked on Laura after the match. She said she was fine, that there are no injuries.

“I felt really sorry to cause the shock and drama to her. She didn’t deserve that in any way. She was obviously volunteering as well and doing her work.

“The rules are clear so I accepted it, I had to move on. Of course, I have not forgotten about it. I don’t think I will ever forget about it.

“These things stay in your memory for the rest of your life, but I don’t think I will have any issues coming back to the tour and being able to perform well.”

May 19, 2020 Admin Comments Off on Arsene Wenger calls for January transfer window to be SCRAPPED and slams agent power