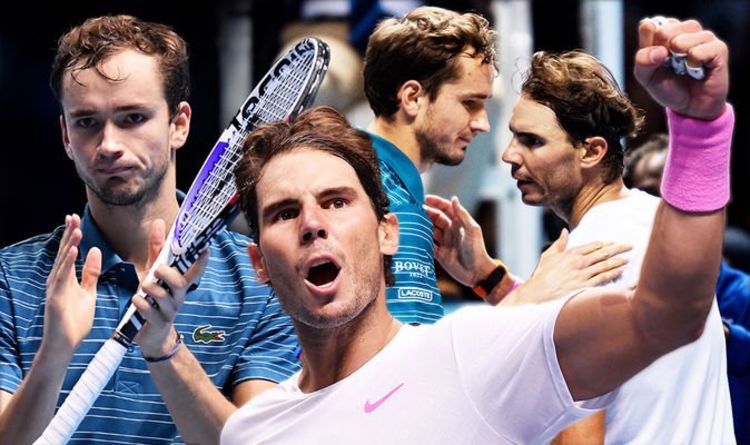 Rafael Nadal was staring an early ATP Finals exit straight in the face until he launched an amazing comeback to beat Daniil Medvedev 6-7(3), 6-3, 7-6(4) in his second round-robin match this afternoon.

The world No 1 was 5-1 down in the deciding set when he saved a match point and rallied to victory.

Medvedev’s hopes of reaching the semi-finals will be in tatters if Stefanos Tsitsipas beats Alexander Zverev in tonight’s session.

And Nadal apologised to the young Russian after beating him in one of the closest-fought matches of the tournament.

“Honestly I have been super luck, that’s the real thing,” Nadal said.

“Sorry to Daniil, it is a tough loss, he was playing much better than me in the third.

“I can’t thank all of you guys for the support it means a lot to me.”

Nadal won five games in a row at the end of the match but Medvedev held his final service game to take the encounter to a tiebreak.

The Spaniard was heavily backed by those in attendance at London’s O2 Arena and he credits the support for getting him out of a very sticky patch.

“At 5-3, when you have the first break then you are only one break away,” Nadal said.

“I know from personal experience how tough it is to close the matches, especially when you are two breaks in front and lose the first one.

“After the first one I though I had a chance.

“In general terms I played much better than two days ago so that’s a positive thing for me.

“I have had lots of years on the tour, I love this sport, I love playing in these amazing stadiums. That’s the biggest motivation possible.

“It’s impossible not to fight when you have amazing support like this.”

April 30, 2020 Admin Comments Off on What Premier League players think about season returning amid coronavirus chaos