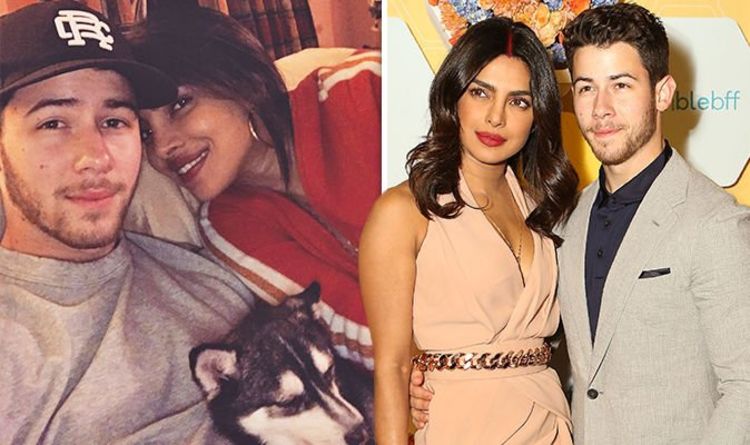 The 36-year-old Hollywood actress looked very smitten with her husband as the newlyweds cosied up for a festive selfie with a pet dog. Priyanka Chopra could be seen wearing a comfortable but stylish red tracksuit with stripes down the sleeves, while Nick Jonas, 26, donned a grey T-shirt and a baseball cap. Their Christmas tree was visible in the background as Priyanka leaned in close to her popstar beau and they smiled for the camera. “Dogs and Christmas,” he captioned the upload, which he shared with his 19 million Instagram followers. “Wishing you all the best with your loved ones.”

Nick also tagged his famous wife in the cosy snap.

However, eagle-eyed social media users spotted what appeared to be a typo in his caption, referring to “dogs” plural.

Several commented on how awkward the error was, with one saying: “You mentioned ‘dogs’ but I saw only one dog I hope everyone got it right.”

“Wait dogs? Priyanka is not a dog,” another quipped, while a third added: “Correct your caption. Dog not dogs.”

Others focused on the sweet Christmas message, with one simply saying: “Merry Christmas to you too!”

“Merry Christmas to you and the whole family,” another said, as a third chipped in: “Such a sweet picture. You are both total couple goals.”

Nick and Priyanka tied the knot earlier this month, holding both Christian and Hindu ceremonies at the Umaid Bhawan Palace in Jodphur, India.

They later held a third reception in Mumbai, which was attended by her fellow Bollywood stars.

In Mumbai, she wore a pastel blue two-piece with a top and skirt embroidered with delicate floral detailing.

The crop top showed off her slender midriff as she posed for pictures with her former Jonas Brothers star beau.

It also featured dramatic oversized sleeves which trailed down by her sides.

Nick, meanwhile, looked dapper in a dark green suit over a black top.

The couple first started talking via direct messages on Twitter back in 2016.

They later met at an Oscars after party in 2017 and got engaged this summer.

How to get fit at home: Olympic gymnast Max Whitlock shows you how with cushion

January 3, 2020 Admin Comments Off on How to get fit at home: Olympic gymnast Max Whitlock shows you how with cushion

February 28, 2020 Admin Comments Off on Louise Redknapp: ‘Thanks for making me smile’ Jamie Redknapp’s ex gushes in cosy pic