Privacy experts say they're concerned life-insurance programs that reward customers for behaviours like logging their activity using a fitness tracker could have unintended consequences for the safety of their personal data.

Insurance giant John Hancock, owned by Canadian company Manulife Financial Corp., announced Thursday a switch to "interactive" life-insurance policies only, which offer incentives for things like wearing a Fitbit or other fitness tracker.

Customers in John Hancock's program — a partnership with Vitality Group — do not have to log their activities to get coverage, but can receive discounts or other perks if they do. The insurer will begin converting existing traditional life insurance policies to interactive versions in 2019, it said.

That concerns privacy advocates who worry these optional programs won't be optional down the road.

"At this stage, they're saying it's voluntary," said Ann Cavoukian, who served as Ontario's Information and Privacy Commissioner from 1997 to 2014.

"My gut says overtime it's not going to be voluntary, or it will be less voluntary, or there will be consequences for not doing it. Like you'll pay higher premiums because … you're not willing to share that data. That's what disturbs me."

The individual has to be in control of their personal information related to their physical activity and other choices that they make in their life. – Anne Cavoukian, former Ontario Information and Privacy Commissioner

Cavoukian said there are some positives about insurance programs that offer incentives for maintaining healthy habits.

"I do the 10,000 steps. I subscribe to that kind of activity, so I think it's a plus for those individuals who choose to engage in that kind of behaviour," she said.

"But that is the key issue here. The individual has to be in control of their personal information related to their physical activity and other choices that they make in their life. And they have to be free not to want to share that kind of data with their insurance company."

Although Manulife has not announced a similar move away from traditional insurance policies here in Canada, the Toronto-based company rolled out its own interactive policies in 2016, following successes with similar programs in Africa, Asia and the U.S.

Cavoukian warned Canadians to "be aware of unintended consequences." She said health information could get into other hands, such as employers who might take a dim view if you fall off the fitness wagon.

"Something I've heard again and again during my three terms as privacy commissioner, is that the unknown arises — something you hadn't anticipated in terms of having your information used for something it was not intended for." 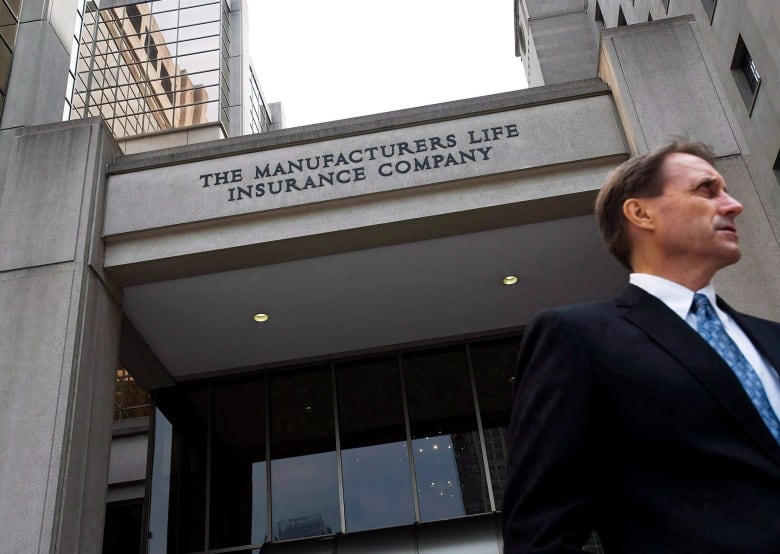 A man is seen outside the Manulife Financial head office in Toronto in this May 3, 2012 file photo. Manulife has not announced a move away from traditional insurance policies. (Aaron Vincent Elkaim/Canadian Press)

Tandy Thomas, an assistant professor at Queen's University's Smith School of Business, also has some mixed feelings about this model of insurance.

She said she's in favour of interactive policies like the ones offered by John Hancock — and believes they could bring about a positive shift in the insurance industry. But she cautions that consumers don't know what fitness tracking for insurance purposes could look like in the future.

"We're at a pivotal point now where the technology is moving faster than our ability to fully think through the moral and ethical implications," said Thomas. "There always needs to be a level of caution in thinking about how is this going to be used.

"It has huge potential for bringing about consumer good and societal well being, but we need to make sure that it's actually what's happening and that it's not being distorted in a way that could lead to unintended negative eventualities."

Corey Larocque, communications advisor to the Privacy Commissioner of Canada, said in an email to CBC that although the Commissioner's office has not looked at this particular case, the issue of companies offering incentives in exchange for personal information is "very much on our radar."

Laroque said the exchange of personal information for a financial consideration, such as reduced insurance premiums, is acceptable as long as the organization abides by the Personal Information Protection and Electronic Documents Act (PIPEDA), Canada's federal private sector privacy law.

"As a general rule, we encourage people to carefully consider the potential implications before sharing any personal information — especially sensitive information."

Dr. Joshua Tepper, a family physician and University of Toronto associate professor in family medicine, said he sees the John Hancock news as the result of two factors playing out in his practice.

For one, his patients are embracing health tracking and often come into their appointments armed with fitness information and other biometric data — including heart rate and blood pressure. Secondly, insurance companies write to him more than ever to seek information about his patients and their interactions with the health care system.

Tepper said there's a risk that insurance firms may rely too heavily on things like fitness data when genetic factors, family history and the kind of work people do also play big roles in health and life expectancy.

For example, he questions whether, if you twisted your ankle and couldn't meet your steps goal for three months, it would be fair for your insurance company to hike your premiums.

"Do we really know that that difference in steps is going to lead to a different outcome?"

Elizabeth Wettlaufer confessed to attacking a 15th patient. The public was never told

January 31, 2019 Admin Comments Off on Elizabeth Wettlaufer confessed to attacking a 15th patient. The public was never told

Mental health support by text launches for kids across Canada

November 7, 2018 Admin Comments Off on Mental health support by text launches for kids across Canada