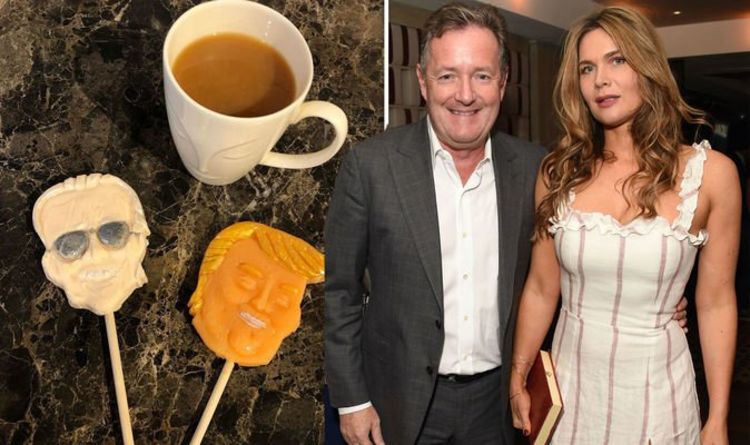 Piers Morgan, 55, and his wife Celia Walden, 45, have taken to their respective social media pages to share their thoughts on Donald Trump and new American President Joe Biden today. Ahead of the latter’s speech at his inauguration, Celia couldn’t resist taking a swipe at Trump as he finally left the White Office. The journalist took to her Instagram page to share a cup of tea alongside two lollies; one with Trump’s face on and the other with Joe’s.

“Anything that colour’s bound to be toxic. #suckonthatdonald #deliverance.”

One user wrote: “That’s great,” alongside crying with laughter emojis.

READ MORE: How much was Andrew Lincoln paid for The Walking Dead?

A second commented: “Good riddance to the air head, the world became a safer place today.”

Celia’s post was also liked by her husband Piers, who has shared his thoughts during Biden’s inauguration this evening.

While watching the footage of Joe’s ceremony, the Good Morning Britain presenter tweeted: “Is that squealing baby Trump?”

He followed up his post, writing: “This is a great speech, the best I’ve ever heard Biden.”

Earlier today, Piers couldn’t resist taking one final swipe at Trump before he officially stepped down as President.

He tweeted: “You blew it, Donald.

“If you’d shown Americans leadership & empathy when it really mattered in the past year, you’d have been re-elected.

“Instead, you failed them. Spectacularly badly. And now you slink off as a gutless graceless sore loser. How pathetic. Shame on you.”

Trump broke tradition by not attending his successor’s inauguration today.

Joe said of Trump at a news conference: “He’s been an embarrassment to the country, embarrassed us around the world. He’s not worthy to hold that office.”

Piers Morgan talks feud with Larry King after host, 87, dies ‘He hated me replacing him’

January 23, 2021 Admin Comments Off on Piers Morgan talks feud with Larry King after host, 87, dies ‘He hated me replacing him’