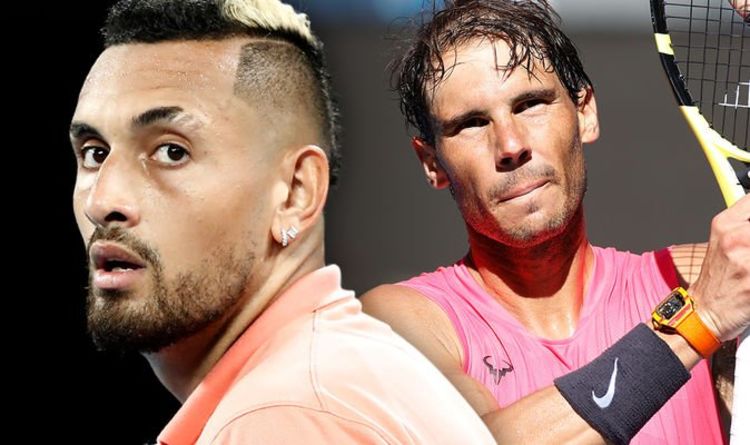 Nick Kyrgios and Rafael Nadal insist they respect one another – but they both stopped short of complimenting their Australian Open rival.

The pair has been engaged in a bitter war for the past 12 months after their explosive clash at the Mexican Open.

Nadal slammed Kyrgios for “lacking respect” after he delivered an underarm serve as he knocked the Spaniard out of the tournament en route to winning the title.

The world No 26 then gave an explosive interview with the No Challenges Remaining podcast where he slammed “super-salty” Nadal.

Tempers boiled over in their most recent meeting at Wimbledon last summer, where their fierce rivalry took a nasty turn.

In the heat of the battle Kyrgios launched a ferocious forehand at the 19-time Grand Slam winner’s chest and admitted he did so on purpose.

Nadal shot the 24-year-old a death stare after miraculously blocking the effort with his racket and he later blasted the “dangerous” move.

So fireworks are expected on Rod Laver Arena on Monday as the two tennis icons come to blows for a place in the quarter-finals.

“At the end of the day, we’re two different tennis players,” Kyrgios said of Nadal after winning a thrilling fifth-set tiebreak against Karen Khachanov. “We go about it completely different.

“After Wimbledon, I lost, I got beaten by the better player. I shook his hand, looked him in the eye, and said, ‘Too good’.

“Regardless, if we don’t like each other or whatever, I think there’s a layer of respect. He’s one of the greatest of all time. I also read that he thinks I’m good for the sport.

“There’s a layer of respect that we both have for each other. Doesn’t necessarily mean we like each other, but… We’re going to go out there and give contrasting styles and personalities.”

Nadal gave a similar analogy of their relationship earlier in the day after he cruised past Pablo Carreno Busta in straight sets.

The 32-year-old was asked if he liked Kyrgios, to which he replied: “I don’t know him personally, honestly, to have a clear opinion. Yeah, my answer is better to…

“It’s clear, of course, that when he does stuff that in my opinion is not good, I don’t like. When he plays good tennis and he shows passion for this game, he is a positive player for our tour, and I want my tour bigger, not smaller.

“So the players who make the tour bigger are important for the tour. When he’s ready to play his best tennis and play with passion, is one of these guys. When he’s doing the other stuff, of course I don’t like.”

And the feeling was mutual as Kyrgios fielded the same question.

“I don’t really dislike him. I never said… I mean, I don’t know him at all. Hell of a tennis player. Don’t know him as a person. I’m sure he’s okay.”