She Was Sent To Prison For Losing Her Baby. Now She Wants To Clear Her Name.

admin
Admin
posted on 10 months ago — updated on 1 month ago
351
views
In 2012, Sara was sentenced to 30 years in prison under El Salvador’s strict anti-abortion laws. Last month, she was freed thanks to a growing movement to defend the women facing decades in prison on

MEXICO CITY — On June 7, nearly nine years after police had detained her, Sara was getting ready to leave prison. After lunch, she slipped out of her white uniform and into civilian clothes, eager to get to the other side of the walls and hug her family.

The close friends she had made in prison walked her as far as they could inside the facility, crying. They begged her to speak out for them and the particular plight they all shared: Following miscarriages or stillbirths, the women had been convicted of homicide and sentenced to 30 years in prison in El Salvador under the country’s strict anti-abortion laws.

“It hurts to have left them behind,” Sara, 29, told BuzzFeed News during a Zoom interview from San Salvador, the country's capital.

Sara, who asked that her last name be withheld to protect her family’s privacy, is the latest in a slow trickle of women convicted on similar charges who are having their sentences commuted — 11 since 2017, according to the Agrupación Ciudadana por la Despenalización del Aborto, a pro–abortion rights advocacy group. The country has filed aggravated homicide charges against at least 129 women for alleged abortions since 2000. At least a dozen remain in prison.

But even as they hail each new release as a victory, women’s rights groups warn that the state’s insistence on treating each case as unique rather than grouping them together means that many people remain behind bars for crimes that others are being freed for, resulting in a patchwork and somewhat arbitrary rollback of severe sentences.

El Salvador has one of the harshest anti-abortion laws in the world, with no exceptions made even when the pregnant person’s life is in danger. Virtually all of those who have been jailed for abortion-related crimes have been poor, and many have lacked access to prenatal care. Some have said they were handcuffed to their hospital beds and then taken straight to prison.

Some countries in Latin America have loosened abortion restrictions over the last decade. Uruguay legalized it in 2012. In Mexico, the state of Oaxaca became the second area in the country to permit it in 2019. And in December, Argentina’s senate approved it for the first 14 weeks of pregnancy.

But others, including El Salvador, have skirted the trend. And as legislation loosening abortion restrictions has spread across the region, so has the backlash. Evangelical politicians have gained influence, powerful segments of civil society have successfully fought back against sex education in public schools, and the Catholic Church has quietly forced young rape victims to carry their pregnancies to term even after they’ve sought legal abortions.

“It’s painful to see the state punishing girls so unjustly” in El Salvador, said Paula Ávila-Guillén, executive director of the Women’s Equality Center, a New York–based organization that monitors reproductive rights in Latin America. Those facing charges are often young people who have little access to healthcare and education, she added: “Girls who were marginalized and abandoned by the state to begin with.”

A woman holds a placard that reads, "Justice for Sara" as Sara, who was sentenced to 30 years in prison for a suspected abortion, attends a hearing in Cojutepeque, El Salvador, on May 31, 2021.

In prisons in El Salvador, a staunchly Catholic country, people believed to have undergone abortions have been shunned and beaten by other incarcerated people, according to women who have been released from prison.

In September 2019, BuzzFeed News visited Sara and two women convicted of killing their newborn babies, who were serving time at the Centro de Detención Menor para Mujeres in Izalco, a women’s prison near the country’s Pacific coast. During a 90-minute interview in a gated-off area near the main courtyard, Sara sat on a white plastic chair as Kenia Hernández, then 24, braided her hair. With a handful of guards hovering nearby, Sara whispered her story: In 2012, nearing her due date, she slipped as she was washing dishes and passed out. Sara woke up in a hospital bed, her baby was dead, and a police officer was getting ready to detain her. A court sentenced her to 30 years in prison for aggravated homicide.

The women said they rarely had access to sanitary pads and soap, and the previous months had been particularly tough: President Nayib Bukele had declared a state of emergency in the country’s prisons in order to curb gang activity, tightening confinement measures — including banning all visitors. Sara had bags under her deep-set eyes, and her voice was heavy with yearslong exhaustion.

Bukele has said women should not be jailed for suffering “spontaneous abortions,” but two years into his presidency, he has not pardoned any.

One of them, Hernandez, was 17 when she got pregnant. One day in 2014, her father, a strict man who she frequently feared would beat her, became irate at Hernandez for not cleaning the house sufficiently and started chasing her, she said. Hernandez tripped and fell and went into labor shortly after. Her father fled, and her baby died. She, too, was sentenced to 30 years.

Attorneys for Hernandez presented a petition to have her sentence commuted in 2018. It was approved in 2020, but she will not finish her shortened sentence until June 2023.

Each case is analyzed individually by the Justice Ministry, a criminological team that includes psychologists, and the Supreme Court.

Last year, the Working Group on Arbitrary Detentions, a United Nations human rights panel, published a report on the case of Sara and two other women imprisoned in El Salvador under similar circumstances, Berta Margarita Arana, 28, and Evelyn Beatriz Hernández, 23. It concluded that the three women had been arbitrarily detained and urged El Salvador to free them immediately and provide financial compensation.

Sara is embraced by her mother as she is released from jail in Zacatecoluca, El Salvador, on June 7, 2021.

Sara's lawyers petitioned for the state to commute her sentence, which was approved in February 2020. Shortly after, they requested that she be released early on parole.

On her final day in prison, Sara awoke to take her regular 4 a.m. shower, had breakfast, went to work mowing grass, sat through lunch, and attended a crocheting workshop. She hadn't known she was getting out that day until the afternoon, when the guards told her to get ready to go home.

Her attorneys say they are going to request a revision of Sara’s sentencing in order to have her declared not guilty — until then, she worries that her criminal record will make it hard for her to find a job. 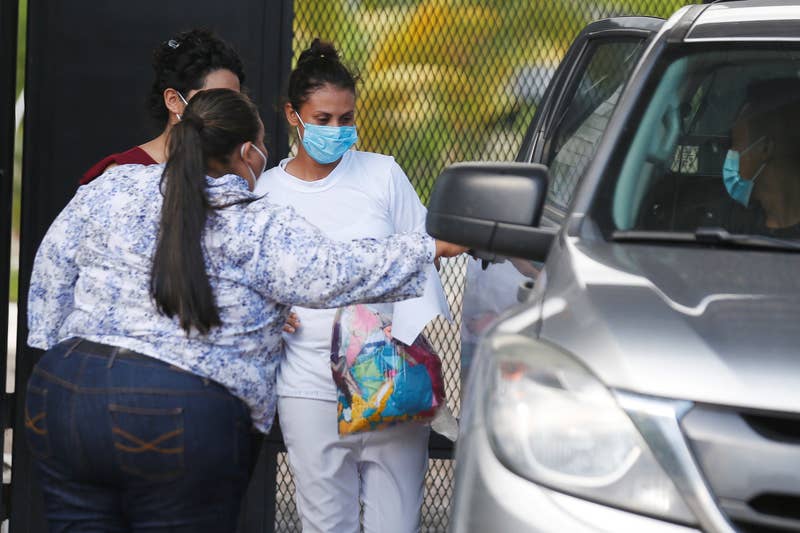 In the four weeks since her release, Sara has been spending time at home with her family. So much has changed, she said. Her stuffed animals and school books are no longer there. Her brother died just as she was sent to prison. Now able to rebuild her life, she wants to go back to school to become a nurse.

Looking a decade younger than during her interview at Izalco two years earlier, with her hair in a tight bun and her eyes sparkling under blue eyeshadow, Sara described her hopes for the future: to clear her name and help free her friends still behind bars.

The women she left behind “are in bad shape, sad and desperate,” said Sara. Many of them have children they are eager to get back to, she added, “to take care, to raise.” 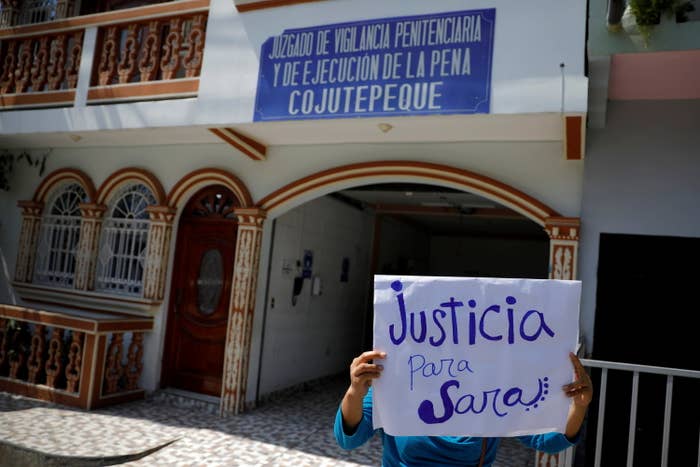