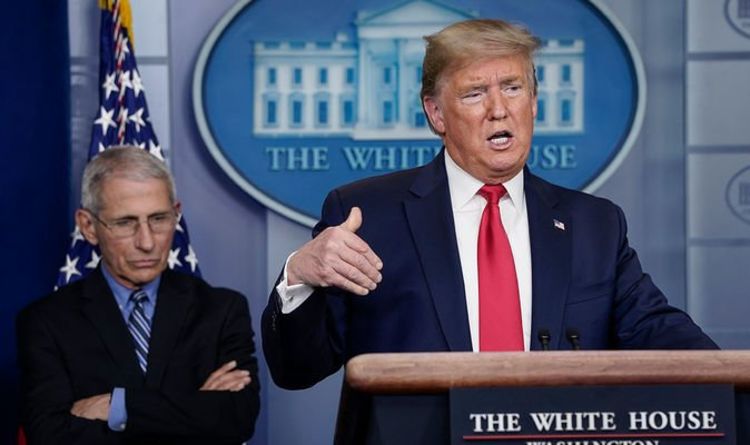 Describing the pace of the contagion as “faster than a bullet train”, the governor criticised the federal government for not sending anywhere near enough essential medical supplies to help deal with the crisis. With new infection rates doubling every three days, New York was the source of 60 percent of all new cases in the country. At present, the state has over 25,000 confirmed cases of the virus and at least 210 deaths.

He angrily criticised the US Federal Emergency Management Agency for providing just 400 ventilators.

“The [infection] forecaster said to me, ‘We were looking at a freight train coming across the country.’

The governor went on to warn that rate of infections could overwhelm the healthcare system.

Margaret Harris, a WHO spokeswoman, declared: “We are now seeing a very large acceleration in cases in the US.

“So it does have that potential to become the centre of the pandemic.”

The US president admitted that it was becoming ever more difficult to obtain crucial healthcare supplies and equipment.

In a tweet, he wrote: “The world market for face masks and ventilators is crazy.

“We are helping the states to get equipment, but it is not easy.”

However, the US President sought to deflect blame away from his administration’s failure to provide adequate support.

He blamed the New York Governor for not purchasing more ventilators in 2015, citing a conspiracy-mongering website.

Mr Cuomo retorted by saying the Trump administration should invoke the Defence Production Act to force businesses to manufacture the lifesaving machines.

The US President continued to downplay the severity of the crisis, insisting that the country would get back to normal by Easter.