In a razor-tight race to govern Israel, voters are facing a clear question — is Benjamin Netanyahu’s time up? Or will the 69-year-old prime minister be anointed for an unprecedented fifth term?

At a Tel Aviv campaign stop in a crowded market, supporters gushed over his 13-year leadership.

“He’s our father, our saviour, the king of the world. Who else can speak with Putin, with China? Only him,” said one man, kissing a photo of Netanyahu. “Here, see. He’s the king!”

Israel’s election is all about “Bibi,” as Israelis call him; a referendum on the most widely recognized political face of Israel.

“He’s made it so,” said Reuven Hazan, a political science professor at Hebrew University. “He’s saying, ‘I’m the only one who can play at this level internationally.'”

But no path to governing comes without a coalition of parties in the Knesset, Israel’s national legislature, and Netanyahu is working hard now to shore up his base. Fourteen main parties are competing for 120 seats.

Last Friday, he warned that splintering right-wing support between many parties could wound his party Likud, and lead to a “weak” leftist government.

“Is that what you want?”  Netanyahu challenged voters. 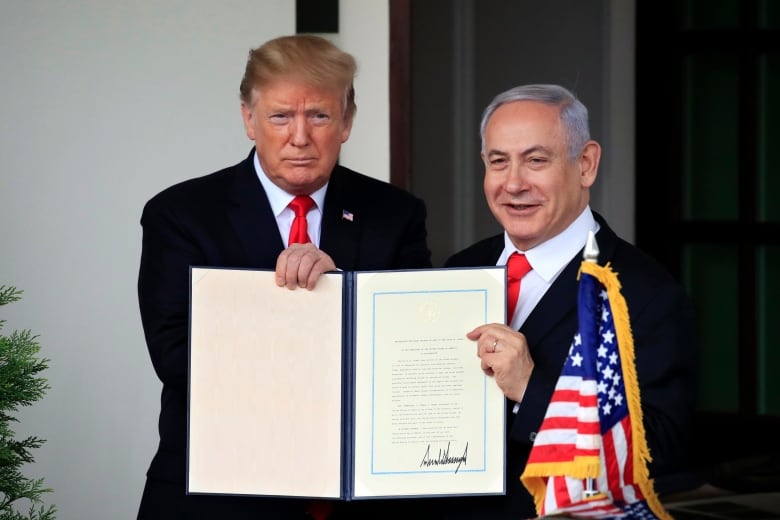 Israeli Prime Minister Benjamin Netanyahu and U.S. President Donald Trump hold up the signed proclamation recognizing Israel’s sovereignty over the Golan Heights at the White House in Washington on March 25. In a tight race for re-election, Netanyahu has gotten a welcome lift from his friend in the White House. (Manuel Balce Ceneta/Associated Press)

Then Saturday night, in a local TV interview, Netanyahu vowed to extend Israeli sovereignty over Jewish settlements in the occupied West Bank, where hundreds of thousands of settlers now live.

“Who says we won’t do it?” he said to the television host, “We are on the way and we are discussing it.”

‘We’re scared to be hopeful for the future’

The controversy over West Bank settlements is seen by many as a major obstacle to a peace plan. “Canada does not recognize permanent Israeli control over territories occupied in 1967,” states government policy.

A spokesperson for Mahmoud Abbas, the Palestinian leader, said Sunday, “any measures and any announcements will not change the facts. Settlements are illegal and they will be removed.”

“I think we’ve gotten to a point where we’re scared to be hopeful for the future of Israel,” said Ethan Haas, 18, a first-time voter in Tel Aviv. 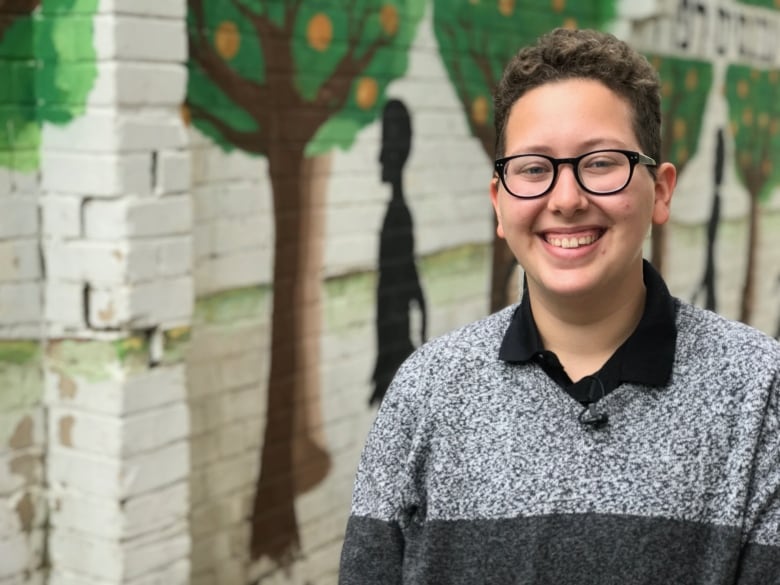 Ethan Haas, 18, is voting for change believing Netanyahu should be replaced: ‘I’m sure, in the beginning, he was great, but all he’s focused on now is coming back and getting as much power as he can.’ (CBC News)

Haas is enrolled in a gap year education program — Mechinat Bina — which teaches Jewish culture to young people about to go into their compulsory military service.

“Regarding the Palestinians, people don’t talk about peace anymore. They talk about how to calm things down for now, and that sucks.”

Yuval Shayo, also 18, said: “I want to see the hate cease on all fronts between those different divisions In Israel that don’t talk to each other.”

“I want there to be an atmosphere where we can hear each other out. And the current prime minister does not foster that kind of atmosphere.”

Netanyahu is being fiercely challenged by a new centrist political party, Blue and White, lead by Benny Gantz, 59, a former general and military chief of staff. Though he is a political newcomer, Gantz has mounted the most serious opposition to Netanyahu. 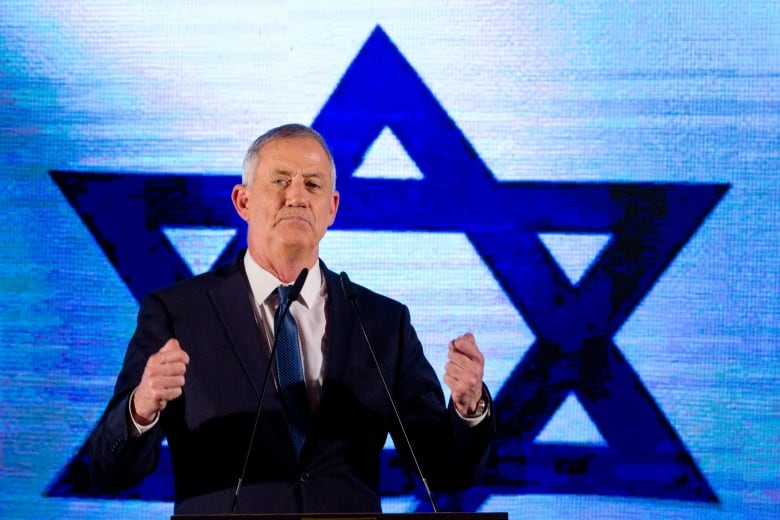 Blue and White Party Leader Benny Gantz gestures as he speaks during an election campaign rally to his supporters in Tel Aviv, Israel on Sunday. (Sebastian Scheiner/Associated Press)

“I’m not going to say do or don’t vote for anybody,” said Robert Wolf, a resident of Mishmeret, in central Israel.

He can say that with heart-stopping surety.

Wolf nearly died two weeks ago, along with his family, when a rocket fired from Gaza slammed through the roof of his home. Wolf’s son roused him from sleep, at the sound of the siren. He got out.

“I hear this, like a whoosh, and then, a mighty explosion took place and my whole home was in the air,” he told CBC News.

“For about 25 seconds, I thought that’s it, I’ve lost my family. I ran into the mess and found my wife on the floor, blood all over the place.” 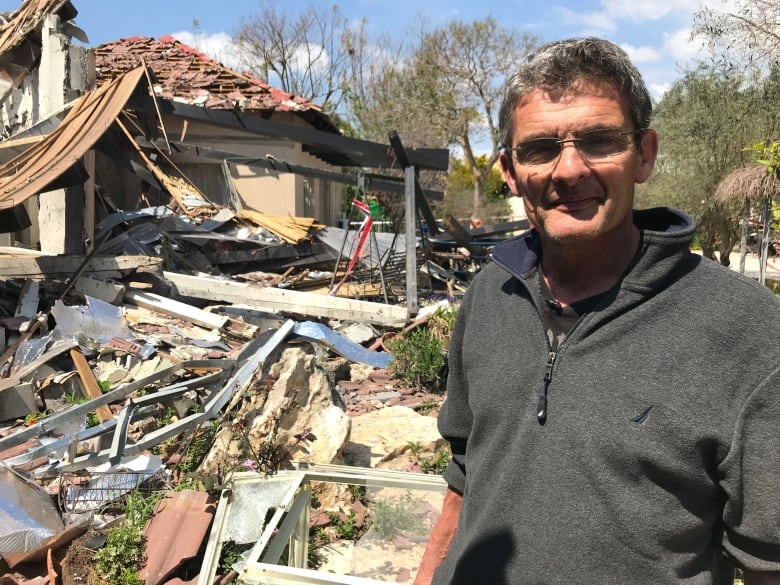 Robert Wolf says the rocket attack on his home has not changed his opinions. ‘My anger towards a certain group of people who fired a missile and nearly killed my family has gone up a level, I’m allowed to feel that. But it hasn’t changed the way I feel about my Arab friends,’ he said. (CBC News)

She survived, with shrapnel injuries. His whole family did, in “a night of miracles,” Wolf said.

“Why were we hit? Because we are Israelis, because we are Jews, because this is our homeland. And there’s a lot of people don’t want us here. And it was our turn. We got it.”

Few young Palestinians believe neither a renewed mandate for Netanyahu nor a leadership change will improve prospects for peace between Hamas and Israel.

“I can’t see any good future with any Israel government old or new. I can’t imagine,” said Mahmoud Salman, 28, who works selling kitchen equipment in Gaza City for about $ 15 a day.

He said he “kills the pressure” he’s feeling by writing and recording rap songs. 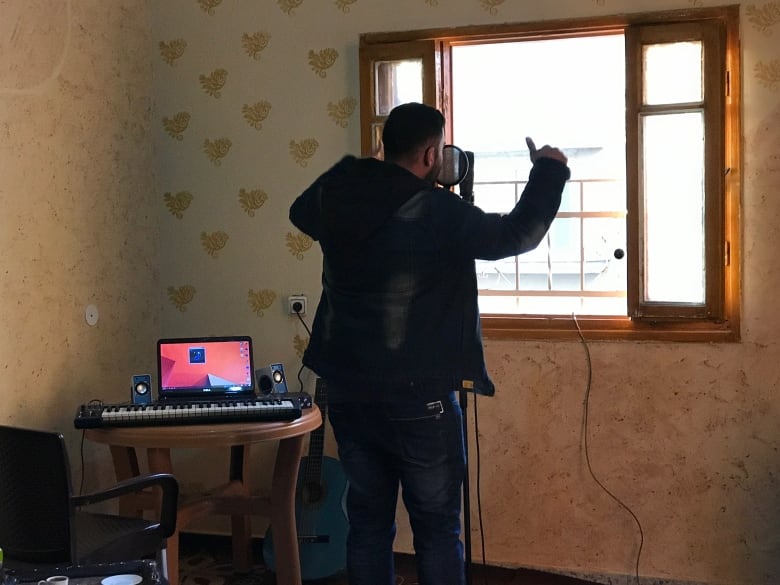 ‘My hope is to travel throughout the world and see different cultures, but I don’t have the chance to leave Gaza.’ says Mahmoud Salman, 28. He’s a business graduate but can’t find comparable work. ‘I rap for politics, for social things, for what I feel.’ (CBC News)

He came to Gaza at age three and he’s never been outside. One of his lyrics says: “Give me a visa with no return.”

At a dusty lot, a group of young men play volleyball. Mahmoud El Najjar, 23, is a Phys Ed grad, but can’t find a job.

On the eve of the vote Tuesday, polls project ‘King Bibi’ and his party could pull fewer seats but be asked to form a government anyway, building a coalition of right-wing parties.

But Israeli election results are notoriously complicated and filled with their fair share of surprises.