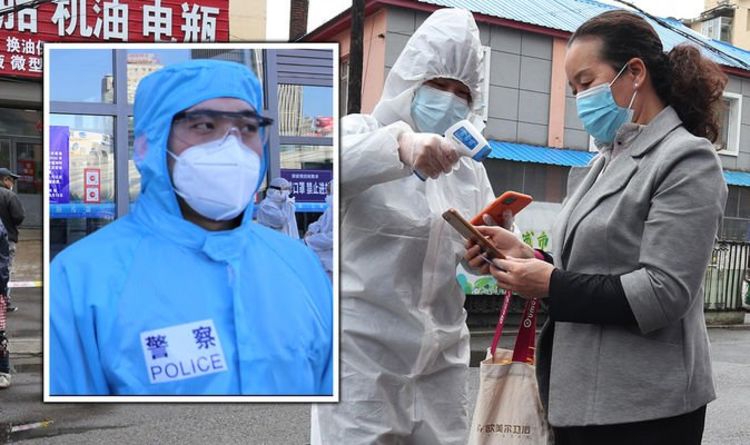 Chinese officials have imposed quarantine restrictions on two cities in the province of Jilin located in northeast China. Jilin is part of a wider province located in the Dongbei region – which is home to more than 100 million residents. The threat level in the area has been raised to “high-risk” by health authorities.

Around 40,000 residents in the cities of Jilin and Shulan have been tested for coronavirus after officials were alerted to a possible new outbreak.

In Jilin, authorities stopped all major transport links to and from neighbouring cities until further notice.

Schools, public places and public transport were forced to close.

In the past 24 hours the Jilin health authority reported five new confirmed cases of COVID-19 in Jilin – located near to the eastern borders with Russia and North Korea.

On Monday the National Health Commission (NHC) said there had six new cases of the deadly virus in China – including one in the city of Wuhan – which is widely thought to be the origin of the disease.

The NHC said three of the six new cases were imported.

The imported cases were all in the northern Chinese region of Inner Mongolia to the west of Jilin.

The total number of coronavirus infections in China currently stands at 82,960, with the death toll at 4,634.

China continues to be at the centre of a worldwide storm after US President Donald Trump threatened to permanently halt funding for the World Health Organization (WHO).

Mr Trump suspended US contributions to the WHO last month, and accused the organisation of promoting Chinese “disinformation” about the coronavirus – something the WHO and China denies.

Mr Trump said in the letter to WHO chief, Tedros Adhanom Ghebreyesus, the only way forward for the WHO was for it to demonstrate independence from China.

The US President said: “If the WHO does not commit to major substantive improvements within the next 30 days.

“I will make my temporary freeze of United States funding to the WHO permanent and reconsider our membership.”

China’s foreign ministry spokesman, Zhao Lijian said: “The US leadership’s open letter is filled with phrases of suggestions, maybes, and potentialities, and is trying to mislead the public through this specious method, to achieve the goal of smearing and slandering China’s efforts in epidemic prevention and to shift responsibility in its own incompetence in handling the epidemic.”

Boris urged to punish Beijing over new Hong Kong law – ‘China is getting too aggressive!’

May 27, 2020 Admin Comments Off on Boris urged to punish Beijing over new Hong Kong law – ‘China is getting too aggressive!’

October 31, 2018 Admin Comments Off on Christian on Pakistan death row FREED after being accused of insulting Prophet Muhammad