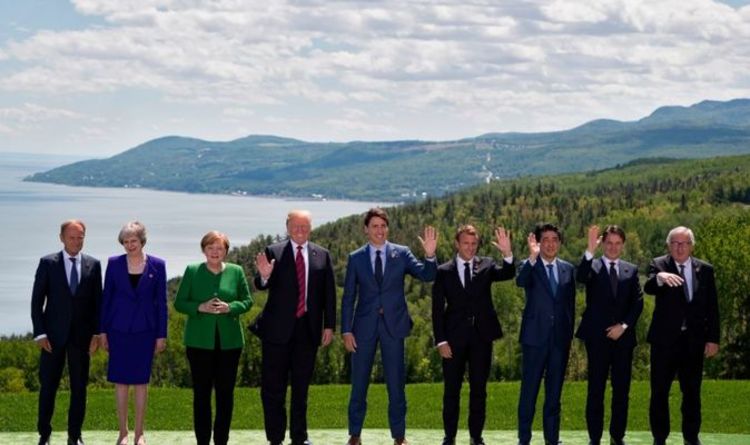 Merkel’s spokesman said earlier today that because of the coronavirus pandemic she could not “commit to participating in person”. But her spokesman stressed the chancellor would continue to monitor the coronavirus situation in case things changed.

The statement added: “The federal chancellor thanks President Trump for his invitation to the G7 summit at the end of June in Washington.

“As of today, considering the overall pandemic situation, she cannot agree to her personal participation, to a journey to Washington.”

Leaders from the Group of Seven, which the United States hosts this year, had been scheduled to meet by videoconference in late June after COVID-19 scuppered plans to gather in-person at Camp David, the US presidential retreat in the state of Maryland.

However, President Trump last week indicated he could hold the huge gathering after all.

He made clear his hopes of hosting the meet “primarily at the White House” but also potentially parts of it at Camp David.

The US President believed there would be “no greater example of reopening” than holding a summit of the Group of Seven leaders in the United States near the end of June.

Of the leaders, 65-year-old Chancellor Merkel is the oldest G7 leader after President Trump, who is 73.

The two world leaders also discussed a comprehensive free trade agreement between the UK and the US and the ongoing issues in Hong Kong over a proposed Chinese security law.

The spokesman continued: “The leaders said that China’s plan to impose national security legislation on Hong Kong goes against their obligations under the Sino-British Joint Declaration and would undermine Hong Kong’s autonomy and the one country two systems framework.”

Meanwhile, Canada’s Prime Minister Justin Trudeau, who hosted the 2018 summit, has said any in-person gathering would have to prioritize safety, while a French presidential official said that Emmanuel Macron was “willing to go to Camp David if the health conditions allow.”

Charles Michel, President of the European Council said through a spokesman that he would attend “if health conditions allow.”

Merkel is the first leader of the group to give a firm no, while other world leaders have expressed vaguely positive responses.

Alaska earthquake: Anchorage hit by ANOTHER strong quake – ‘Not again!’

December 6, 2018 Admin Comments Off on Alaska earthquake: Anchorage hit by ANOTHER strong quake – ‘Not again!’

EU WARNING: Brussels has forced Italy into DEAD END – It will NEVER be able to repay debts

December 27, 2018 Admin Comments Off on EU WARNING: Brussels has forced Italy into DEAD END – It will NEVER be able to repay debts

September 23, 2019 Admin Comments Off on Great white shark horror as image of surfer being stalked by beast in encounter goes viral