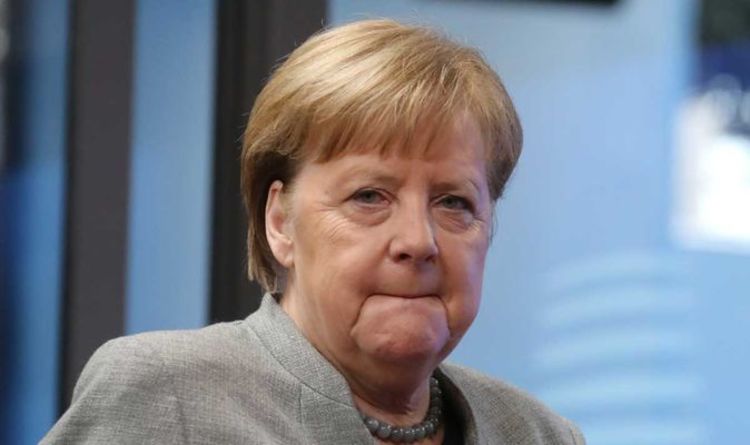 Voters in Hamberg will head to the polls to elect their new parliament tomorrow and the Christian Democratic Union (CDU) is currently trailing in third place. A Politbarometer poll for Hamburg indicates the Social Democrats (SPD) will remain the biggest party in the election in the northern port. It would allow the party to continue its coalition with the resurgent Greens.

The survey found support for the Greens is set to double to 24 percent.

The CDU part is current polling on just 12 percent – down four points.

The election will be the first test for the party since the shock resignation of its leader Annegret Kramp-Karrenbauer.

The crucial regional votes comes a day before the CDU outlines plans to elect its next leader.

Ms Kramp-Karrenbauer, who was seen as the heir to Ms Merkel as Chancellor, announced her departure a fortnight ago after her party was humiliated in the election of the Governor of Thuringia.

Ms Kramp-Karrenbauer was unable to prevent a rebellion from CDU politicians who voted with the far-right Alternative for Germany party (AfD.

The 57-year-old condemned those who voted against the Government and ruled out working with the far-right group.

She said: “The AfD stands against everything we as the CDU represent.

“Any convergence with AfD weakens the CDU.”

The CDU chief won the contest to succeed Ms Merkel as leader of the party in December 2018 but told leading members of the party she will not be seeking the chancellorship in next year’s election.

Ms Kramp-Karrenbauer, who also serves as German defence minister, said she will stay on as CDU chief until her successor is chosen.

The German Chancellor expressed her “regret” at the decision.

Ms Merkel said: “I regard this decision with great respect, though I greatly regret it.

“I can imagine this wasn’t an easy decision for her and I thank her for being prepared to stay on to steer the process of choosing a successor.”

Despite the political chaos Ms Merkel said she will not run for a fifth term in Germany’s next general election, which is now scheduled for autumn 2021.

Challenge to Trump! Iran orders US military to LEAVE Syria ‘Whether you want to or not’

February 7, 2019 Admin Comments Off on Challenge to Trump! Iran orders US military to LEAVE Syria ‘Whether you want to or not’