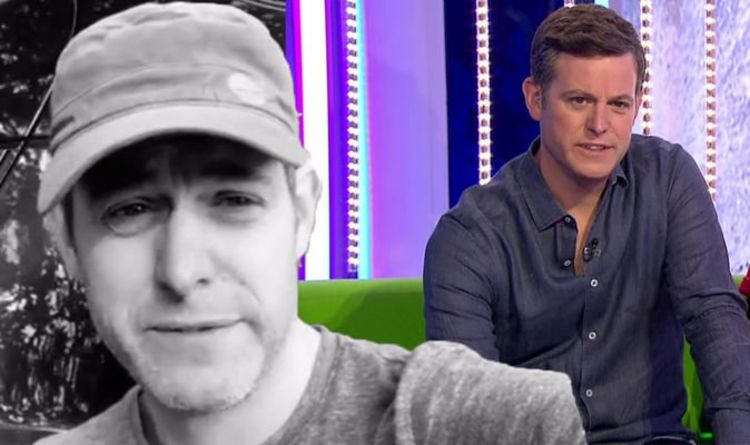 Matt Baker took to Instagram after running into a spot of trouble at home last night. The former The One Show presenter revealed the “annoying” moment in a candid video with his 172,000 followers.

The 42-year-old has been isolating at home after a family member showed coronavirus symptoms.

He even had to say goodbye to the BBC programme after nearly a decade via video link to co-star Alex Jones, who was in the studio.

Matt shared a monochrome-tinted clip on the picture-sharing app, after his attempts to leave home were temporary halted.

“So this is slightly annoying,” he started. “I haven’t left home for weeks, come out to do a bit of shopping and… great.

“The old flat tyre going on,” panning the camera to the issue.

Sporting a baseball cap, Matt was casually dressed in a faded T-shirt, jeans and wellington boots.

He was then joined by a young companion, thought to be his son, Luke.

The small screen favoruite is also father to daughter Molly with wife of 16 years, Nicola Mooney.

He continued: “There you go. Just thought I’d show you this before we put the other tyre on. Isn’t that lovely?”

Two others continued: “And there is a lesson school can’t teach!” and: “Maybe they should taught us how to do that on Blue Peter, I haven’t got a clue how to change mine.”

Some fans when on to mention his former show, which he emotionally departed from on Tuesday.

“Good to see there is life after The One Show, Mat! #andsosayallofus,” a reply quipped.

Richard Hammond on ‘threat’ from The Grand Tour co-star James May: ‘Not going to work’

March 27, 2020 Admin Comments Off on Richard Hammond on ‘threat’ from The Grand Tour co-star James May: ‘Not going to work’

October 31, 2018 Admin Comments Off on A Place In The Sun 2018 presenter Jasmine Harman causes a stir as she reveals new look