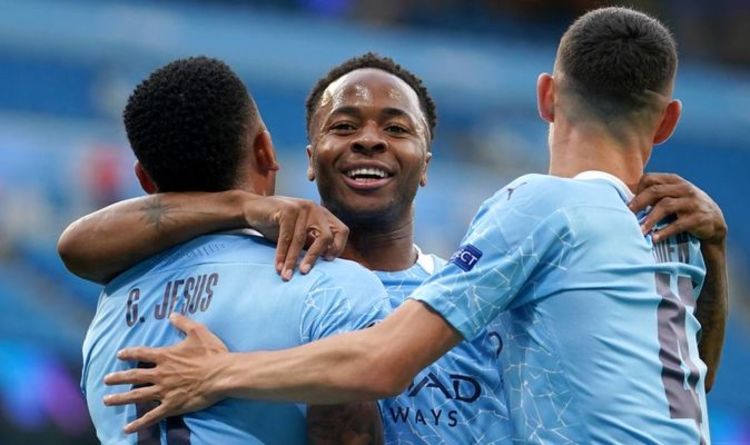 Manchester City take on Olympiakos in Greece tonight in the Champions League on the cusp of qualification from their group. Pep Guardiola will want all three points, though, to bounce back from a shoddy weekend where they were defeated by Tottenham. Their domestic woes have not been mirrored in Europe, where they have won all their matches this campaign.

City will be looking to bounce back from their miserable Premier League campaign with a win over Olympiakos in the Champions League tonight.

The defeat to Tottenham on Sunday has left them 13th in the table and eight points behind Spurs – who are top of the league.

But it has been a different story in Europe, where they need just one point to secure passage to the next round after three wins out of three.

Guardiola may not change much from the side at the weekend, with some injuries forcing his hand, while the likes of Phil Foden and Raheem Sterling are possibilities to start.

However, the Spaniard has already admitted he will not rush Sergio Aguero back from injury and is unlikely to play a role with him set to field a 4-3-3.

The Brazilian has been a mainstay for City this season due to a lack of credible options.

But that lack of competition seems to have played a part in a drop in form and his goalkeeping could be questioned this campaign, especially at the weekend.

Heung-min Son and Giovani Lo Celso scored two fine goals but Ederson made their minds up by rushing out at times when it may have been better to stay back.

It must be said that usually the 27-year-old wins those kind of challenges but he was not quick enough on those occasions, leading to both strikers being able to just roll the ball underneath him.

Guardiola will be desperate to see a partnership flourish between Ruben Dias and Aymeric Laporte, with the former arriving for big money in the summer.

Since the departure of Vincent Kompany, City have looked a lot less astute in defence and the former Barcelona boss will be keen to give as much playing-time as possible to his main two.

Eric Garcia’s continued contract debacle at the club means it makes no sense to field him with his heart set on a departure while Nathan Ake was injured on international duty.

Joao Cancelo has impressed at left-back, despite him being his weaker side while Kyle Walker has started every match this season.

Rodri’s lack of mobility was exposed by Tottenham at the weekend but he should have an easier time tonight with City expected to dominate possession.

Kevin de Bruyne is simply undroppable for City, though Guardiola will be desperate to give his main man a rest.

But the truth is they are simply too reliant on the Belgian, who is in danger of being overworked, but one player that could come in to midfield could be the man to allow him to take a backseat.

Phil Foden is fully deserving of a first-team slot at the Etihad after impressing with England and gives a fine blend of energy and class in the middle of the park.

Raheem Sterling did not start against Tottenham, with Riyad Mahrez being preferred but the Algerian was largely ineffective.

The Spurs defence knew exactly what to do against the ex-Leicester man and an Olympiakos backline could look very similar.

Partnering the Englishman on the other flank could be Ferran Torres, who has been brilliant in Europe for City with three goals.

For Spain, the ex-Valencia star has looked lethal too – netting a hat-trick against Germany – while Gabriel Jesus looks set to continue deputising for Sergio Aguero.

The Argentine will, at best, be afforded a spot on the bench as Guardiola does not want to aggravate another injury after rushing him back already this season.

December 5, 2019 Admin Comments Off on Why Man Utd chief Ed Woodward will struggle to sign ‘best of the best’ players in January

September 18, 2019 Admin Comments Off on Liverpool chief Peter Moore at hospital with Reds fan hurt in ‘ambush’ before Napoli clash