Mohamed Salah kicked his Premier League campaign with Liverpool a hat-trick against Leeds United and he has dedicated his goals to ill Egypt teammate Moamen Zakaria.

Zakaria was diagnosed with Amyotrophic lateral sclerosis (ALS) – also known as motor neurone disease and will not play football again.

Salah scored two penalties in the Reds unconvincing 4-3 win against the newly-promoted side at Anfield while Virgil van Dijk was also on the scoresheet. 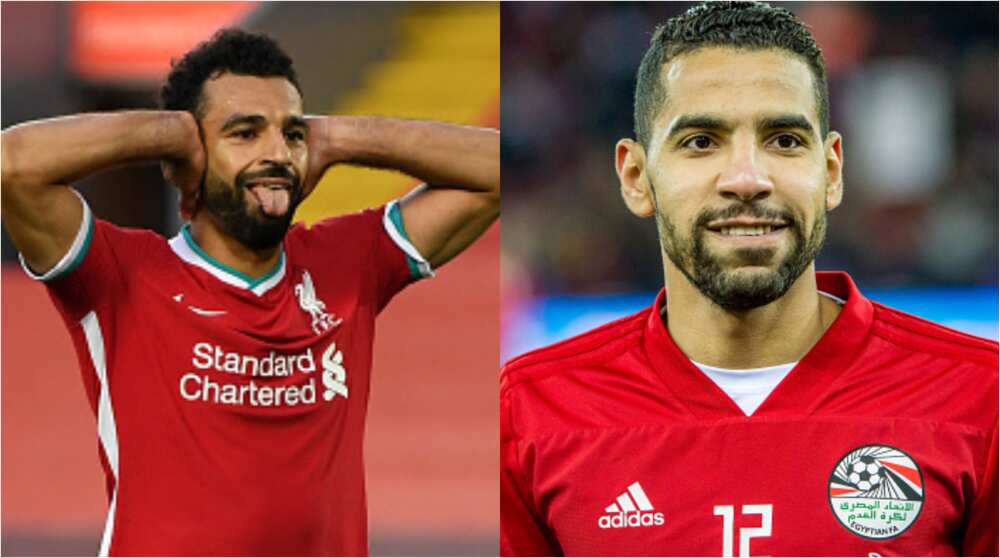 And after completing his hat-trick from a spot-kick Salah pressed his hands over his ears and stuck his tongue out to emulate Zakaria’s celebration.

Players from Zakaria’s club Al Ahly also joined in a moment of solidarity by doing the celebration after their win over Ismaily in league match played in the Egyptian Premier League.

And the 32-year-old took to Twitter to show his appreciation: “I thanked Al Ahly’s management and players.

“I enjoyed one of the most beautiful days of my life with. It was one of the sweetest days in my life for almost two years.

“I thank all fans. Your prayers to me for a speedy recovery.”

Zakaria made his national-team debut in 2014 and earned 12 caps including three as he helped the Pharaohs qualify for the 2018 World Cup.

He won three Egyptian Premier Leagues in a row between 2015 and 2017 as well as three Egypt Cups.

Meanwhile, Legit.ng had earlier reported that Liverpool got their Premier League title defence off to a winning note following their victory over newly-promoted side Leeds United at Anfield.

The Reds needed Mohamed Salah’s late minute penalty to survive the scare of Marcelo Bielsa’s men at the end of the encounter.

It took the defending champions just four minutes to open scoring from the penalty spot after Robin Koch handled the ball in his own 18-yard box.

October 6, 2019 Admin Comments Off on 6 things that make Nigeria one of the most unique countries in the world