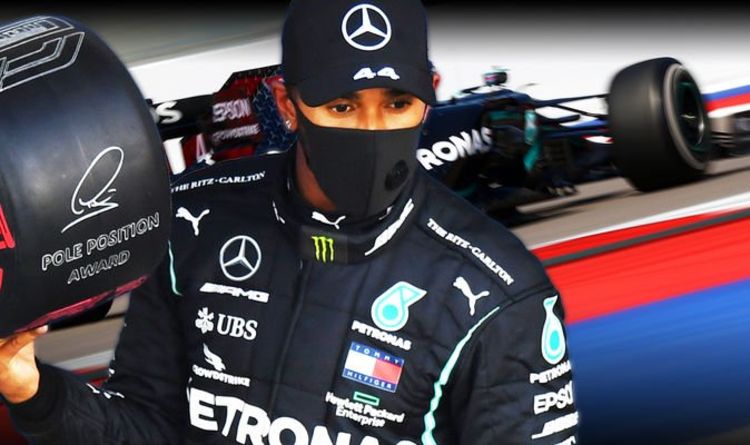 Lewis Hamilton was summoned to the stewards at the Russian Grand Prix after qualifying in pole position. Max Verstappen beat Valtteri Bottas to second place and stopped a Mercedes front-row lockout.

The Brit was 15th after his initial lap was cancelled because he went off the track at Turn Two.

The six-time world champion was able to record an out-lap as he crossed the line with 1.25seconds to spare before Q2 was finished.

Hamilton had another scare in Q3 when he drove into the gravel, but he was investigated for a failure to return to the track safely earlier in qualifying.

“P3 is a good place to start and I think I have the advantage of being on the right starting tyre so it’s still all to play for.”

Meanwhile, Verstappen backs himself to overtake Hamilton come lights out.

“We were struggling a bit to find the right balance with the car on this track, it’s quite slippery around here,” Verstappen explained.

“Even this morning I was not entirely happy but through qualifying we were really working on trying to nail the balance and in Q3 the final run especially was not bad.

“To be second on the grid I didn’t expect, so very pleased for that.

“If we can have a decent start the tow effect is very big around here, so if we can get a good start who knows what is going to happen into Turn Two.”

Hamilton said: “It was one of the worst qualifying sessions – it was horrible!

“Heart in your mouth the whole way. I got the time taken away, which is the first time I’ve gone wide there the whole weekend. I wanted to stay out and do another lap just to get a banker but they said ‘come in, get new tyres’ and then the red flag came out. It was a real risk once we got out on that next tyre at the end.

“Ultimately I’m starting on the soft tyre which is not good. It’s nice being on pole, but here it’s probably the worst place to be on pole with the draggier cars this year. So undoubtedly I’m most likely going to get dragged past tomorrow. Both the cars I’m racing against are both on the medium tomorrow so it’s definitely going to make it hard to win the race.

“Nonetheless I’m going to stay positive, try and figure out how I’m going to navigate my way through, get a good start or whatever it may be, and we’ll see.”

May 1, 2020 Admin Comments Off on Tour de France could end up being a throwback to its dark days due to coronavirus crisis