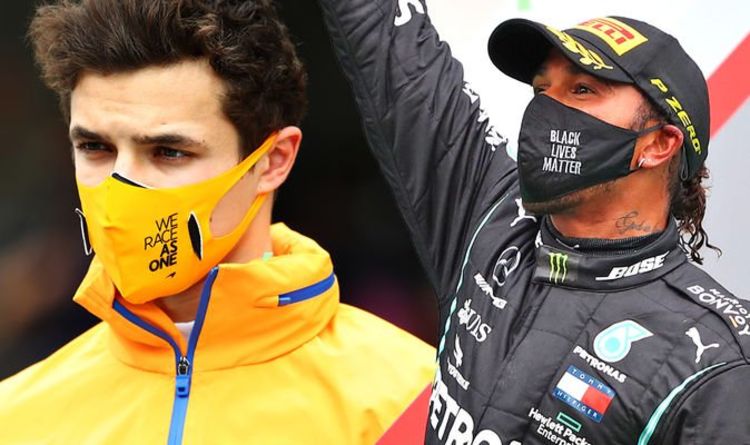 Lewis Hamilton broke Michael Schumacher’s record of 91 wins in F1 with his victory in the Portuguese Grand Prix but McLaren driver Lando Norris was reserved in his praise for the Mercedes man. Norris said Hamilton only has to beat one or two drivers to take the win such is the dominance of his car.

The McLaren youngster has since taken to social media to apologise for his comments.

Norris finished 13th in the Portuguese Grand Prix after a collision with Lance Stroll and was clearly angry after his race was ruined.

The Brit seemingly took that out with spikey comments on Hamilton breaking the record.

Norris was also less than kind to Stroll who he claimed was trying to ‘be a hero’ with his attempted overtake which ruined the McLaren star’s race.

The 20-year-old has since taken to social media to issue an apology.

“I owe an apology,” said Norris.

“I’ve been stupid and careless with some things I’ve said lately in media and interviews, and haven’t shown the respect I should have to certain people.

“I’m not that kind of person, so know I should apologise to them but also everyone reading [or] listening. Sorry.”

After Hamilton broke Schumacher’s record, the McLaren driver did not go all out in his praise for the world champion.

“I’m just happy for him, nothing more,” Norris said.

“It doesn’t mean anything to me, really. He’s in a car which should win every race, basically.

“He has to beat one or two other drivers, that’s it. Fair play to him, he’s still doing the job he has to do.”

Norris also took aim at Lance Stroll after colliding with the Racing Point driver in Portugal.

“I don’t know what he was doing really,” said Norris.

“He went to the left which I was quite surprised by, when he very easily could have gone to the inside. I was easily halfway alongside and he just turned in.

“He obviously didn’t learn from Friday but he doesn’t seem to learn from anything he does. It happens a lot with him, so I just need to stay away.

“It wasn’t a nice battle. I don’t know what I’m meant to say… he crashes a lot. “I don’t know if he can’t see properly in the right side or something. He ruined his own race, he ruined my race, it was his fault.

F1 returns this weekend with the drivers racing at the Imola circuit in Italy.