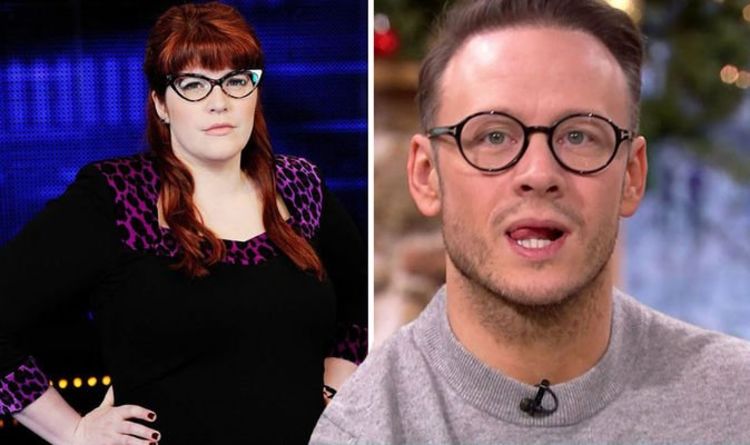 During his stint on the show, The Chase’s Vixen star Jenny Ryan, 37, took to Twitter to tell fans why she couldn’t film with Strictly Come Dancing professional Kevin Clifton, 36.

The quiz master joked she had been banned from filming with the dancer, in view of her her 51,000 Twitter fans.

She wrote: “NB I wasn’t allowed to be the Chaser on this episode as producers wouldn’t risk having me in the same room as @keviclifton [crying with laughter emoji] #TheChase.”

Jenny’s cheeky comment seems to suggest the Vixen star has a soft spot for Kevin.

The dancer responded to Jenny’s tweet, writing: “Well I wouldn’t have beaten u either,”(sic) along with a series of emojis.

Kevin was eliminated from The Chase after losing out to The Beast star Mark in the second round.

“You did well @keviclifton, you should be proud,” a second commented.

A third commented: “You did really well, there was some tough questions x.”

During the show, the Grimsby-born star revealed he was rejected twice by bosses before successfully being signed.

The dancer insisted he didn’t leave a good impression with BBC bosses at first, after auditioning with his then partner Karen Hauer, 37.

Recalling his rejection, he told Aljaz Skorjanec, 29: “They said, ‘We’d love to take Karen, but not that guy’.”

Kevin auditioned for the show when he had long black hair and wore noticeable kohl eyeliner, a completely different look from his present appearance.

He joked bosses told him at the time: “We’ve no need for that gothic scarecrow who thinks he’s the rock star of the ballroom.”

Kevin auditioned the following year alongside husband and wife pros Janette Manrara and Aljaz, but was rejected from the show again.

In 2012, he was employed as a choreographer, before eventually getting a dance partner the following year.

Following their victory and Stacey’s split from her ex-boyfriend Sam Tucknott, 31, the pair began a relationship.

Stacey Dooley broke her silence about the couple back in July.

Explaining why they choose to keep their romance under wraps, she told The Guardian: “Kev and I have agreed not to go into too much detail about our private lives because you can’t really indulge that and then ask for privacy,” she said.

“That’s why we’ve turned down interviews that have offered us tens of thousands of pounds.

“What I am happy to say is Kev’s amazing, I’m happy, life happens, I’ve got an amazing career and I’m very lucky.”

November 3, 2019 Admin Comments Off on James Jordan: ‘Losing her s**t’ Strictly star speaks out on Shirley Ballas amid Anton spat

February 19, 2019 Admin Comments Off on Piers Morgan: GMB host tells Shamima Begum to ‘go f*** herself’ and 'rot in hell'

Marianne Faithfull, 73, hospitalised with coronavirus as ex reports ‘she can barely speak’

April 5, 2020 Admin Comments Off on Marianne Faithfull, 73, hospitalised with coronavirus as ex reports ‘she can barely speak’