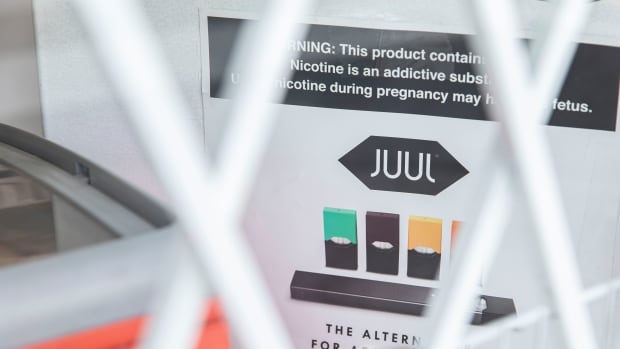 Juul Labs will stop online sales of fruit and dessert flavours for its electronic cigarettes in the U.S., nearly a year after halting in-store purchases.

The voluntary step announced Thursday is the company’s latest concession as it tries to weather a political backlash blaming flavoured nicotine products for getting a generation of teenagers hooked on them.

Juul pulled the fruit and dessert flavours out of stores last November.

The most recent move is unlikely to satisfy the company’s critics. Juul will continue selling its most popular vaping flavours: mint and menthol. Those products account for more than 60 per cent of Juul’s retail sales, according to analysts. They are also the most popular flavours among teens.

The flavoured pods affected by the announcement are mango, creme, fruit and cucumber.

Those flavours account for about 10 per cent of the company’s sales and were only available on its website with what the company said were “strict age-verification controls.”

Last month, the U.S. Food and Drug Administration warned Juul that it was misleading consumers by marketing its products as safer than cigarettes, and requested more information on its nicotine blend.

Juul’s new chief executive, K.C. Crosthwaite, a veteran of Marlboro maker Altria Group Inc, said in a statement Thursday that the company needs to “[earn] the trust of society,” by co-operating with regulators and policymakers.

Elsewhere in the U.S. on Thursday, health officials reported 33 deaths and 1,479 confirmed or probable cases from a mysterious respiratory illness tied to vaping. The 180 new cases in the past week was the lowest weekly increase since mid-September.

Last week, health officials said there may be multiple causes behind the illness and that its cause may not be the same across the U.S.

Last week, the Council of Chief Medical Officers of Health said while the illness is under investigation, they recommend all Canadians to:

No single ingredient, electronic cigarette or vaping device has been linked to all the illnesses.

March 7, 2019 Admin Comments Off on Some 'snitch-line' tips on teaching about same-sex marriage are flagged as alleged professional misconduct