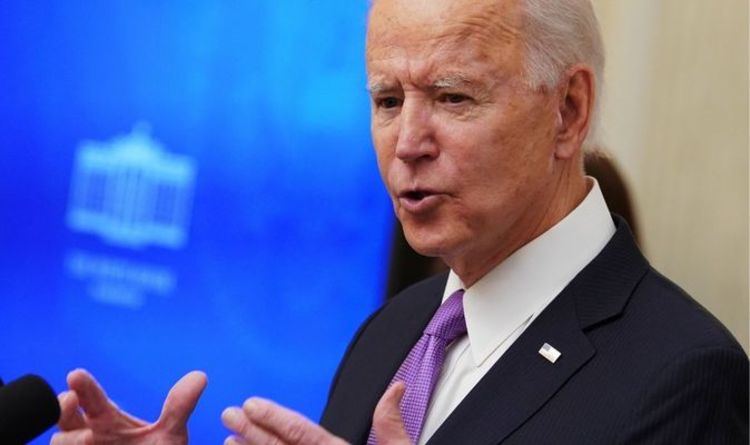 On Thursday, AP’s Zeke Miller asked President Biden about one of his coronavirus 100 day promises. Mr Biden has pledged that 100 million doses of the COVID-19 vaccine will be administered in his first 100 days in office.

Mr Miller asked: “You set the goal at 100 million vaccines in the first 100 days — is that high enough?

“Shouldn’t we set the bar higher? That’s basically where the U.S. is right now.”

President Biden responded: “When I announced it you all said it’s not possible.

President Biden’s coronavirus plan has faced pressure as some claim the policies are setting the bar too low.

The US is currently vaccinating 900,000 people per day, according to NBC News.

Mr Biden’s vaccine plan would only represent a 10 percent increase per day.

Data from Johns Hopkins University indicates that the US has registered over 24 million COVID-19 cases and more than 400 thousand deaths related to the virus.

Mr Biden’s first White House press briefing came a day after he was sworn in as the 46th US President.

On Wednesday, after his inauguration, Mr Biden issued a brutal warning to his White House staff.

During a swearing-in ceremony for White House staff, President Biden told his employees he would fire them “on the spot” if they treat others with disrespect.

In what appeared to be a dig towards former President Trump, Mr Biden said “decency and dignity” had been missing from the previous administration.

He issued the warning to about 1,000 presidential appointees on a video conference after his inauguration.

The political aides will help President Biden steer his first four years in the White House.

During the speech, Mr Biden said: “I’m not just joking when I say this: If you are ever working with me and I hear you treated another colleague with disrespect or talk down to someone, I promise I will fire you on the spot. On the spot. No ifs ands or buts.

“Everybody is entitled to be treated with decency and dignity.

“That’s been missing in a big way in the last four years.”

Angela Merkel’s CDU leader replacement selected TODAY – who will it be?

December 7, 2018 Admin Comments Off on Angela Merkel’s CDU leader replacement selected TODAY – who will it be?