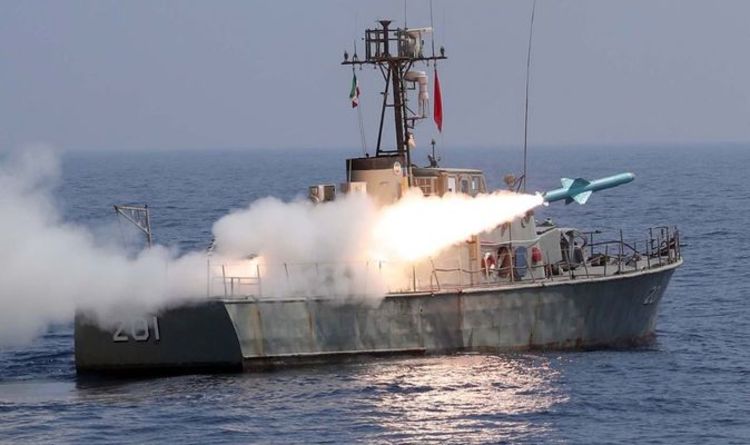 The Islamic Republic began the missile drill today as tensions between the US and the state remain high.

Iran used its largest warship, the Makran and the Zere which has missile-launch capability for the two-day drill.

The state has one of the largest missile programmes in the region and has regularly deployed naval vessels in the Gulf of Oman to flex its military muscle.

Amid tensions between the US and Iran, the Islamic Republic seized two oil tankers in the Gulf of Oman.

The two ships were detained last week after Iranian funds in South Korean banks were frozen due to US sanctions.

In 2019, Iran had also detained a British-flagged tanker, the Stena Impero in a show of force against the West.

Under Donald Trump, the US has employed a maximum pressure strategy against the state.

Washington had imposed severe tariffs on certain industries such as the oil sector and any company which deals with the state.

By doing so, the US has managed to cripple the state’s economy and nuclear proliferation programme.

Mr Trump also withdrew the US from 2015 nuclear deal (the Joint Comprehensive Plan of Action), which restricted the state to low levels of nuclear proliferation.

Since then, tensions have soured rapidly with Washington taking an increasingly hawkish approach to the state.

JUST IN: Brexit LIVE: This ISN’T what we fought for! Brexiteer turns on deal

“Indeed, since 2015, Tehran has allowed al-Qaeda figures in the country to freely communicate with other al-Qaeda members and perform many functions that were previously directed from Afghanistan and Pakistan, including authorization for attacks, propaganda, and fundraising.”

The scientists had been accused of secretly developing weapons for the Islamic Republic.

The official was killed near the capital of Tehran in November.

Iranian state media stated the scientists had been killed by a remote-controlled device.

He is the second Iranian official to be killed in the state following the death of Islamic Revolutionary Guard chief, Qasem Soleimani.

His death sparked a standoff between the US and Iran as both sides shifted towards all-out conflict.

China must pay: Boris ordered by Tory MP to get BILLIONS in compensation from China

April 30, 2020 Admin Comments Off on China must pay: Boris ordered by Tory MP to get BILLIONS in compensation from China