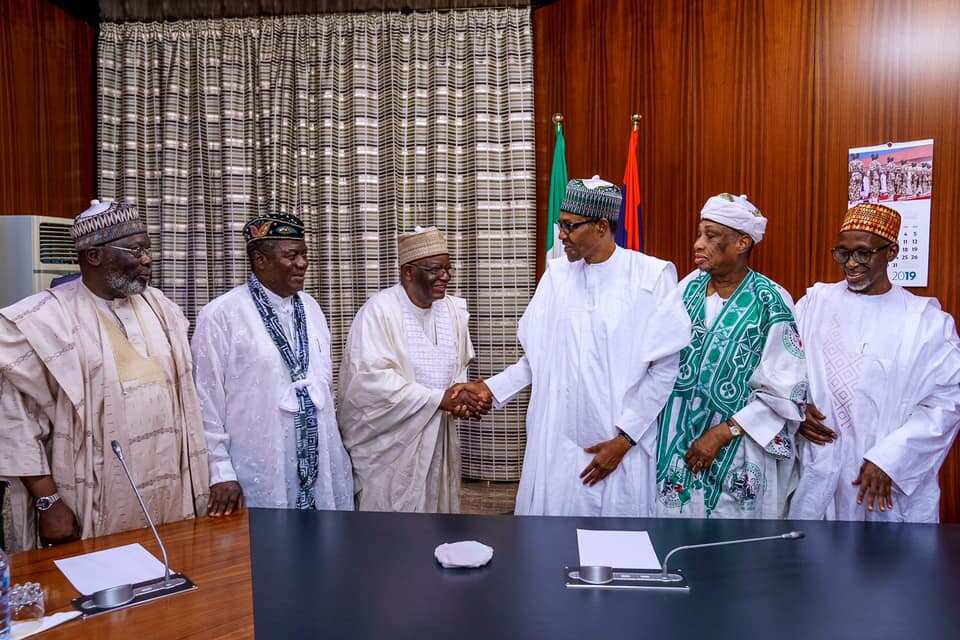 – President Muhammadu Buhari on Wednesday, October 9, said that he would involve everyone in all his programmes and not leave any out

President Muhammadu Buhari has said that he would his best to carry all Nigerians along during this last tenure.

He made this known on Wednesday, October 9, as he received some ministers who served with him when he was the military head of state between 1984 and 1985.

According to a statement signed by his media aide, Femi Adesina, he also applauded the military for making Abuja the capital of the country.

During the meeting also, there was a minute silence for those who had passed on among the ministers that served under him when he was a military administrator.

President Buhari also appreciated the ministers for how they have always “consistently” being in “touch”.

Professor Ibrahim Gambari, the former minister of external affairs, who also led the team, said that they have come to congratulate the president on what he has achieved in areas of security, anti-corruption, education, foreign affairs, among others.

Gambari also spoke about the opportunity the president gave them to serve without interference even though his leadership was firm.

“We were appointed 35 years and nine months ago. Eighteen of us were sworn in. Your leadership was firm, but you also gave us free hand to operate. You knew what each person was doing. We will never forget the opportunity you gave us. We remain patriots,” he said.

Recall that Legit.ng earlier on the meeting with emnating pictures that show the former ministers that visited the president and how he reconnected with them.

NAIJ.com (naija.ng) -> Legit.ng: We have upgraded to serve you better

100 days after, what has President Buhari achieved? | Legit TV

April 6, 2020 Admin Comments Off on Naira Marley turns himself in for questioning at police station after attending Akindele’s party

Instead of leaving Nigeria, this is what you should do – Buhari sends new message to Nigerian youths

December 15, 2019 Admin Comments Off on Instead of leaving Nigeria, this is what you should do – Buhari sends new message to Nigerian youths

April 17, 2020 Admin Comments Off on Mike Ezuruonye says he likes Shatta Wale and Becca’s music, picks them as his favourite Ghanaian musicians