– A prominent Nigerian, Alhaji Shettima Yerima has been on the receiving end of some fake reports

– Yerima, leader of the influential Arewa Youth Consultative Forum, has denied a report attributed to him

The leader of Arewa Youth Consultative Forum (AYCF) Shettima Yerima, has called on Nigerians to disregard various fake news being attributed to him by unknown persons.

Yerima described as false and malicious claim of war and other fabrications in circulation being attributed to him, urging Nigerians and friends of the country all over the world to disregard them in totality.

In a statement the AYCF president signed and sent to Legit.ng on Thursday, October 22, Yerima said he is the target of mischief aimed at discrediting his personality.

EndSARS: New twist to protest emerges as APC, PDP accuse each other of sponsoring violence 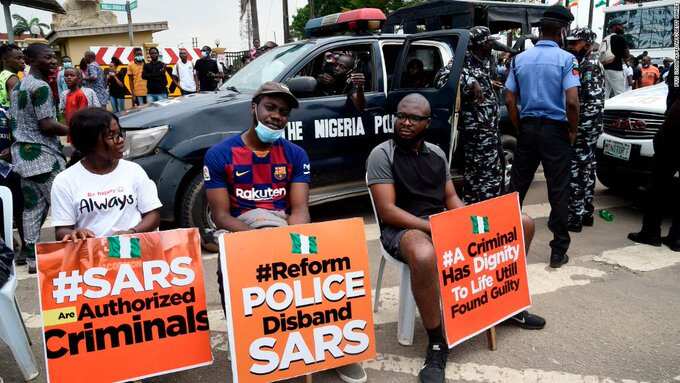 The #EndSARS protests were largely peaceful before it was hijacked by hoodlums. Photo credit: @CNNAfrica
Source: UGC

He also denied making a statement regarding Tuesday’s Lekki shooting in Lagos.

Part of the statement read:

“Nigerians should know that all these fabrications are coming from the enemies of this country. So, I call on Nigerians to disregard the fake news and know that such will never emanate from me.’’

Meanwhile, a chieftain of the All Progressive Congress (APC), Dr Garus Gololo, has described calls from some sections of the country that President Muhammadu Buhari should resign as unpatriotic.

Gololo, at a press briefing on Monday, October 19 in Abuja, said those calling for the resignation of the president are enemies of Nigeria.

The APC chieftain was reacting to the #EndSARS protests nationwide calling for police reforms but alleged that the protests were targeted at Buhari and not the SARS, adding that some powerful politicians somewhere may have been sponsoring the move to make the Buhari administration unpopular and distractive.

Legit.ng had earlier reported that Doyin Okupe, a former presidential media aide, advised the #EndSARS protesters to start the process of negotiating with the federal government.

Okupe, 68, gave the counsel via a Facebook post on Friday, October 16, adding that the whole nation is proud of their efforts in highlighting the need for police reforms.

February 6, 2020 Admin Comments Off on This is what should be done for repentant Boko Haram terrorists – Shehu Sani advises

October 19, 2018 Admin Comments Off on Chelsea eye mega million move for 2 superstars who play in Italy as replacement for Alvaro Morata