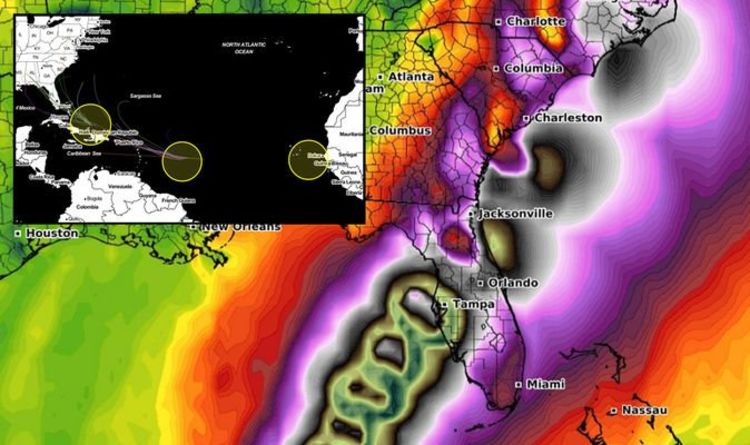 Florida has been hit by severe weather recently, as the extremely powerful, long-lived Hurricane Dorian came close to making landfall in the US state. The destructive tropical cyclone devastated the Bahamas and caused significant damage to the southeastern US. Dorian was the first major hurricane of the 2019 Atlantic hurricane season, whipping out winds of 185mph at its height. But a terrifying map has now shown more disturbances are forming in the Atlantic, and they are all tracking towards the hurricane-prone Sunshine Coast.

One disturbance is currently located near the Bahamas and could develop into Tropical Storm Humberto over the weekend.

According to NOAA, a tropical depression could form in the next few days as it moves slowly towards the west-northwest across the Florida Straits or South Florida.

Regardless of development, the “disturbance could produce periods of locally heavy rainfall and gusty winds across the Bahamas through Thursday, and across Florida during the weekend”, the agency warned.

In addition, another low pressure system is forecast to move westward, potentially shifting towards Florida.

This system does not look as likely to develop into a hurricane, although NOAA reports there is a formation chance of 10 percent through the next five days.

The disturbance is currently located about 650 miles east of the Lesser Antilles and is accompanied by a large but disorganised area of thunderstorms and cloudiness.

The third weather system is located thousands of miles away from Florida at the moment.

Currently, place between the west coast of Africa and the Cabo Verde Islands, it is predicted to move quickly westward during the next several days.

That means the disturbance will move over the tropical Atlantic towards the US or central-America, while it’s slowly developing.

Although the chance of this system hitting Florida is low for the time being, Hurricane Dorian started on a similar route in August.

On August 19, 2019, NOAA identified a tropical wave within a monsoon over Guinea and Senegal in western Africa.

The motion activity associated with the wave was limited by an abundance of Saharan dust in the region.

The system, who developed into major Hurricane Dorian, quickly moved west over the tropical Atlantic Ocean and saw activity increase over several days.

From August 26 to 28, the storm affected Caribbean nations, where it was stationary for almost 48 hours.

The massive storm later affected large portions of the US east coast, including Florida.

January 31, 2020 Admin Comments Off on ‘We’ll fly where we want!’ Spain defiant over Gibraltar as British airspace row escalates

August 21, 2019 Admin Comments Off on Ivanka Trump trolled for controversial posts on nature despite dad’s stance