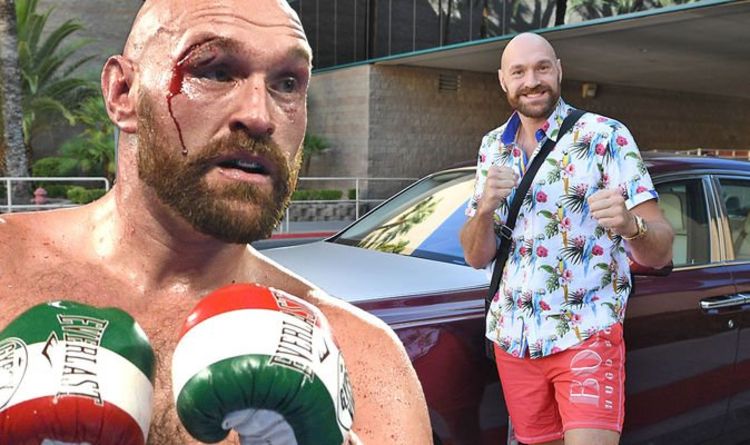 Tyson Fury has once again put himself on the brink of snatching the WBC world heavyweight title from Deontay Wilder’s clutches after a unanimous points victory over Otto Wallin on Saturday night.

The iconic green and gold belt is the only world strap which has evaded The Gypsy King in his 29-fight professional career, and he has come back from the abyss to get there.

It all seemed so rosy for the Manchester-born fighter when he dethroned heavyweight doyen Wladimir Klitschko in November 2015 to claim the WBA, WBO and IBF belts.

A points win in the backyard of a man who had dominated the division for a decade sent reverberations around the boxing world, as did Fury’s voicebox as he serenaded his wife, Paris, with an unflappable rendition of Aerosmith’s ‘I Don’t Want to Miss a Thing’.

But, following that victory, once he was on top of the world, he could only fall.

Weeks after the win Fury was stripped of the IBF title for failing to fulfil their mandatory obligations and instead oblige to his contractual agreement to rematch Klitschko.

An ankle sprain to Fury in training delayed the sequel in his hometown and just five weeks after the rescheduled rematch date, Fury postponed the bout for struggles with fitness.

It emerged soon after he had tested positive for cocaine and was struggling with depression and alcoholism.

Fury vacated the remaining gold-plated leather on his shoulders and watched on as Wilder continued his dominance of the 200lb+ game while Anthony Joshua began his journey of collecting the belts he once owned.

“I used to drink and take drugs to get away from the depression because when I was drunk or high then I wouldn’t think about being depressed,” Fury admitted on a candid appearance on The Joe Rogan Experience.

At his lowest ebb, Fury ballooned up to 400lb and admitted he would drink 18 pints of beer a night, whiskey, vodka and cocaine.

In the summer of 2016 the proud fighting man was on the verge of taking his own life, admitting to Joe Rogan: “I’d go very low at times, very low.

“I’d think crazy thoughts. I bought a brand new Ferrari convertible. I was on the strip of a highway. At the bottom of a five-mile strip there’s a massive bridge that crosses the motorway.

“I got the car up to 190 miles per hour. I didn’t care what no one was thinking. I just wanted to die so bad.

“Just as I was heading to the bridge, if I hit it the car would have crushed like a Coke can by the way, I heard a voice say, ‘No, don’t do this Tyson. Think about your kids. Think about your family and your little boys and girls growing up with no father.’

“And everyone saying, ‘Your dad was a weak man, he left ya, he took the easy way out because he couldn’t do anything about it.’ I pulled over and I could feel myself shaking. I was frightened and afraid. And I never wanted to think about taking my life again. I got help.”

With psychological help and the support from his family, Fury was thrust back into the boxing world and began shedding the excess weight he had put on.

It is well-known he lost the equivalent of a prime Ricky Hatton during his fitness regime and, after a 34-month hiatus, the slick big man returned to the ring.

Flat-track wins against Sefer Seferi and Francesco Pianeta eased Fury back into his pugilistic instincts until he surprisingly took on Wilder in Los Angeles.

He dominated a dramatic 12-round encounter and miraculous got off the canvas in the final round to claim a draw which many thought he should have won.

That showing in America was enough to convince Top Rank and ESPN that Fury was worth spending £80million on in a five-fight deal.

Against Tom Schwarz in June he pranced to the ring clad in US stars and stripes and swept aside the little-known German in two rounds.

Wallin proved a tougher test in Sin City but his grit and fighting spirit were evident once more as he battled through a deep cut above the eye to convincingly win.

Next on the horizon is Wilder – on February 22, we are told – in a fight which could truly cap mark the incredible rise of Fury.

May 6, 2020 Admin Comments Off on Premier League warned over legal action if promotion from Championship is denied

WWE RAW: Will Undertaker and Triple H face each other again after WWE Super Show-Down?

September 11, 2018 Admin Comments Off on WWE RAW: Will Undertaker and Triple H face each other again after WWE Super Show-Down?