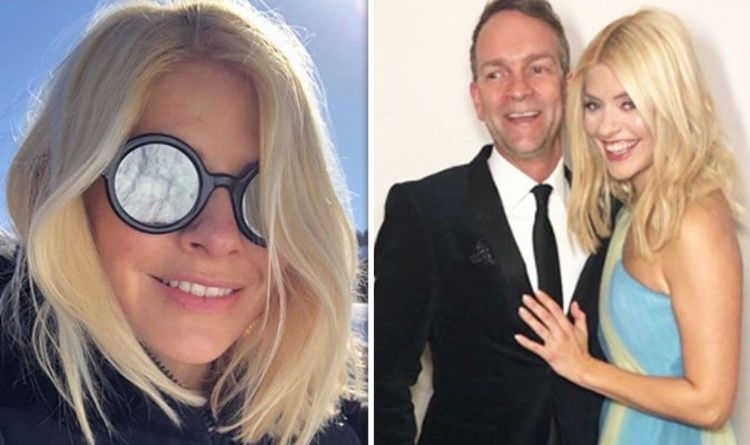 Holly Willoughby, 38, took to the snowy slopes for a short family break and showcased her skiing skills, but there was one family member she was particularly “proud” of. In view of her 5.2 million Instagram followers, the blonde beauty shared a short video of herself and her youngest son Chester skiing. She wrote: “My final baby is off and skiing or as Chester says…off and key-ing… super proud as he’s only 4… now home for tomorrow’s @dancingonice, ski wear @perfectmomentsports his @alexandalexacom.” Fans flocked to the comments to share their well wishes on the presenter’s sweet post.

Another person commented: “Brave boy well done Chester,” while a third fan added: “That is so amazing! Well done!”

The mother-of-three could be seen leading the way as she skied down the slope, with Chester not too far behind her.

Holly – who also presents ITV programme This Morning alongside Phillip Schofield – has been married to her husband Dan Baldwin for over a decade.

The couple met on the set of Ministry of Mayhem in 2004, and were friends for six months before they started dating.

The TV host also posted a selfie snap whilst on her short winter break.

Despite not giving away the location, she captioned the pic: “Au revoir snow and sun … you’ve been magical.”

The fresh-faced beauty wore a pair of circle sunglasses and sported minimal make-up as she posed.

She will be returning from her short holiday break as she gears up for Sunday night’s episode of Dancing On Ice.

Meanwhile, it was recently announced Holly has ended her endorsement with Diet Coke after two years, with reports claiming she “felt she needed a break”.

A spokesperson has confirmed to Express.co.uk: “We’ve loved working with Holly for the last two years and she’s been a great ambassador for Diet Coke.

“For this year’s campaign we have no plans to work with Holly but that’s not to say we wouldn’t work together again in the future.”

She is also the ambassador of Garnier and clothing chain Marks and Spencer.

Last year, Holly left Peter Jones’ lifestyle brand Truly, telling fans via Instagram she had too many other work commitments to prioritise as well as her family.

Dancing On Ice continues tomorrow on ITV at 6pm.

Lauren Steadman: ‘It wouldn’t have been right!’ Debbie McGee on AJ Pritchard’s partner

December 11, 2018 Admin Comments Off on Lauren Steadman: ‘It wouldn’t have been right!’ Debbie McGee on AJ Pritchard’s partner