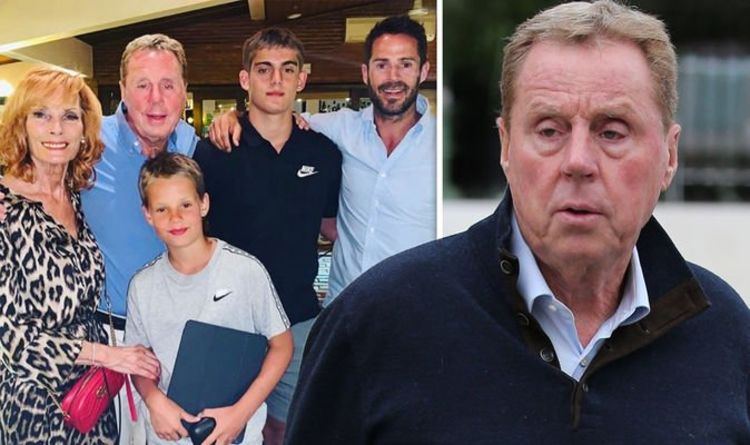 Harry Redknapp, 72, has been soaking up the sun with his wife, Sandra, son Jamie Redknapp, 46, and two of his grandchildren, Charley, 15, and Beau, 10.

The ex football manager shared a glimpse into the holiday in Portugal with his 1.1 million Instagram followers.

The family looked sun-kissed and relaxed as they all beamed to the camera with their arms around each other.

Many of Harry’s followers shared compliments on his post, with one person writing: “Lovely photo, the eldest is a spitting image of Louise & the little one like Jamie xx.”

A third wrote: “Each and everyone of you are wonderful. Would be an absolute pleasure to meet you…. one day x.”

Harry’s ex daughter-in-law, Louise Redknapp, whose divorce from Jamie was finalised in 2017, is also believed to have joined the family on holiday but wasn’t in the group snap.

The 44-year-old singer is still sunning herself in Portugal with her two boys, after Jamie and Harry jetted home for work commitments.

At the weekend, the former Eternal band member shared a stunning selfie where she said she was “happy”.

Louise captioned the shot: “Being away and having the time with my boys is everything #happy.”

Yesterday, the former Strictly Come Dancing contestant uploaded a photo with her youngest son as they spent time together outside.

“True love,” she captioned the snap.

Jamie had also posted pictures from their getaway, with one of him and their sons at the beach.

Showing off his toned dad bod, the former footballer couldn’t have looked happier as he posed with Beau in one picture then Charley in another.

Meanwhile, Jamie recently opened up about his dad’s win on I’m A Celebrity… Get Me Out Of Here!, saying he is now more known for that than his football manager career.

In an interview with Sky News, the father-of-two said: “Obviously, I’ve always looked at my dad as the Premier League fantastic football manager but now people look at him as the King of the Jungle and that’s what everyone talks about.

“‘Your dad was amazing on I’m A Celebrity… ‘, and I’m like well, he was an amazing manager. People have almost forgotten that bit! But it’s all good fun.”

Despite his dad’s success in the jungle, the Sky News pundit said he won’t be following in his footsteps.

“You can’t follow that,” he said. “I think you’ve got to know what you’re good at and he was so good, so funny.”

January 29, 2020 Admin Comments Off on Steph McGovern admits she ‘wasn’t sure’ about ‘old Etonian’ Hugh Fearnley-Whittingstall

I need to escape from fame, says Bodyguard star

September 29, 2018 Admin Comments Off on I need to escape from fame, says Bodyguard star