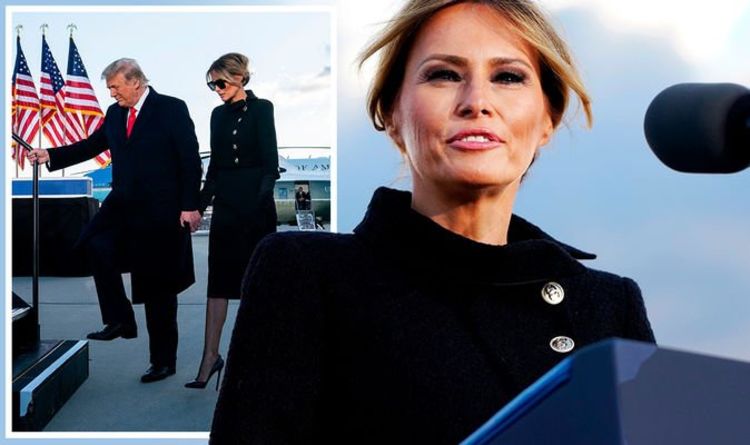 Melania has been accused of not writing any personal “thank you” letters to the White House staff – despite it being a long-standing tradition for outgoing First Ladies.

Typed notes, which were address to butlers, cooks, housekeepers, ushers and maintenance workers, were reportedly written in Melania’s style to make it appear she had written them herself.

But she did not write the notes herself, a source claimed.

Melania signed her name at the bottom of each note but sources have claimed Melania has been “checked out” in the recent weeks.

They also said Melania is “not sad to be leaving” the White House, according to CNN.

R Couri Hay, an American publisher, said Melania was a “reluctant First Lady” who took on the role “for her husband”.

He told The New York Times: “I think that you will find that she will be even less visible, and less available [after she leaves Washington].”

She told The Times: “Melania is and will continue to be the most popular Trump.

Melania then added: “Being your First Lady was my greatest honour.

“Thank you for your love and support.

“You will be in my thoughts and prayers.

Mr Trump is the first president to snub his successor’s inauguration since 1869 but said he wishes the new administration “great luck and great success”.

He said: “It’s been a great honour and privilege to be your president. I will always fight for you.

“I will be watching. I will be listening.

“I wish the new administration great luck and great success.

“I think they will have great success.

“They have the foundation to do something really spectacular.”

But while not mentioning Mr Biden’s name, the former president teased his political return.

He continued: “Goodbye. We love you. We will be back in some form.

“Have a good life. We will see you soon.”

Putin SHOWS OFF SU-57 killer fighter jets as UK unveils F-35 warplanes -but who would win?

May 16, 2019 Admin Comments Off on Putin SHOWS OFF SU-57 killer fighter jets as UK unveils F-35 warplanes -but who would win?