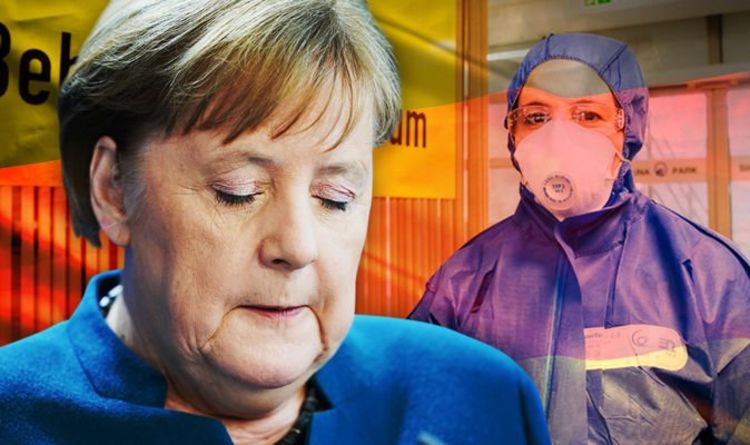 Berlin has accused the United States of “confiscating” an order of face masks headed for Germany at Bangkok Airport. The shipment of protective gear was allegedly seized by US officials, who were reported to have diverted 200,000 face masks to the US before letting the rest of the order arrive in Germany to help in the fight against coronavirus. DW Chief political correspondent Michaela Küfner said: “What is being reported as having happened is that a shipment of these special masks, particularly of importance for medical staff, was transferred at Bangkok Airport in Thailand.

“This shipment was produced by an American company that produces these masks in China and, as we’ve learned, American officials simply confiscated 200,000 masks.

“A part of the shipment went ahead to Germany, that’s where we are.”

Ms Küfner suggested the claim of having masks seized could be a particular embarrassment to the German Government after the Department of Defence last week lost track of a German army shipment of six million face masks during transit in Kenya.

She continued: “This is particularly embarrassing for German officials who just a couple of days ago ‘lost’ some six million masks in Kenya at an airport – a shipment that simply didn’t go through which appears to have been redirected by illegal means.

“There has been a recognition that the official ways simply aren’t working, that private companies are much better at actually tapping into regional networks.

“That’s also why the likes of Volkswagen have now pooled their resources in other logistics companies as well to help the Government out, which has been simply unable to purchase enough masks.

“The German way of doing things clearly isn’t a match for the clear America first strategy which doesn’t seem to shy away from not going down any official route.”

Berlin’s interior minister Andreas Geisel urged Angela Merkel to speak out against US intervention at times of crisis such as the coronavirus pandemic.

Île de France leader Valérie Pécresse said: “We lost an order to the Americans who outbid us on a shipment that we had lined up.”

Jean Rottner, the leader of the Grand Est region, claimed an order of protective gear was bought on the tarmac before the shipment was loaded to a plane headed for France.

“we’re working around the clock to ensure these masks arrive.

“American pay three or four times the amount we pay, and in cash.”

But an unnamed senior US administration officials denied the claims, telling AFP: “The United States government has not purchased any masks intended for delivery from China to France.

“Reports to the contrary are completely false.”

EXCLUSIVE: Furious MEPs tear apart Juncker speech – shows he is 'away with the fairies'

September 15, 2018 Admin Comments Off on EXCLUSIVE: Furious MEPs tear apart Juncker speech – shows he is 'away with the fairies'

June 20, 2019 Admin Comments Off on US-Iran tensions erupt as Tehran ‘shoots down’ US spy drone in latest Middle East attack