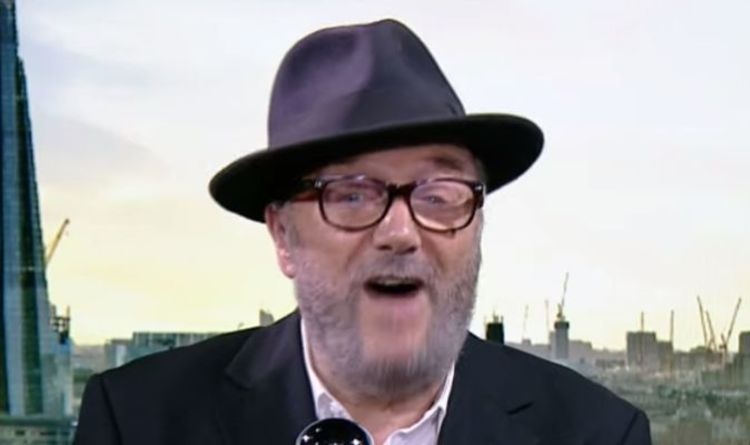 George Galloway compared French President Emmanuel Macron to a “vulture” for paying a visit to Lebanon days after a devastating explosion ravaged the capital of Beirut. Mr Galloway hit out at the French President as he suggested Mr Macron should focus on “his own streets” after over a year of protests against his Government. The Mother of All Talkshows host said: “Lebanon has an extraordinary political system which is one of the main problems for the vultures that have landed, literally, in Beirut over the last few days.

“Principle among them, Little Bonaparte Macron whose own streets have been burning for over a year.

“His own security forces are levelling out atrocious violence against his own people.

“But he’s landed in Beirut as the saviour, colonial power returned.”

President Macron travelled to Lebanon, which was under a French mandate between 1920 and 1946, to assess the damage the capital suffered because of a major blast on August 4.

During his visit, the French President pledged to lead efforts to raise money to reconstruct the city and help the over 300,000 residents made homeless by the explosion.

Mr Macron on Sunday warned the future of the country was at stake after its main port, the point of entry to the nearly 80 percent of exports Lebanon relies on for food, was destroyed.

His intervention led to the creation of a petition calling for France to take back control of Lebanon after months of public protest against the Government of Michel Aoun.

Analysts have interpreted Mr Macron’s visit as an attempt to strengthen France’s influence on both the country and the region after international donors pledged their help and £227million in recovery funds to Beirut while demanding political reform.

But Mr Galloway warned the demands for change Mr Macron and his allies can make would be limited to ensure the Shiite militant group Hezbollah does not take over the country.

READ MORE: Belarus election results 2020: Who is the winner amid an election marred in scandal?

He added: “Trump and Macron, unlike in other places, cannot demand one man, one woman, one vote for Lebanon.”

“That would lead to the overwhelming victory of the political force that they like least.”

Hezbollah’s Loyalty to the Resistance Bloc has held 13 seats within the Lebanese Parliament since 2009. Since 2012, two members have also been part of the Cabinet.

February 26, 2020 Admin Comments Off on Locked and loaded: HMS Prince of Wales arrives in UK – protected by attack helicopters